Like many of you I'm excited for Avengers Endgame this weekend (tickets for Sunday morning woo!), which has me thinking back to the old Data East Captain America and the Avengers arcade game. I still remember the first time I played it. It was Halloween night in 1991. I was in the eight grade (same day as the Terminator 2 make up kit with horror robe *sigh*) and that night Mom took my brother and I to Pizza Hut and Fun Putt.

Fun Putt was a local amusement type place (the fun) with mini golf (that would be the putt), go-carts, batting cages, and an excellent arcade. It was there that I discovered the game and sunk a ton of quarters into it. Later the arcade at my local mall (my beloved Gold Mine Arcade... I'll morn ya till I jorn ya) got a machine which I put many quarters into as well. Later the home version came out and the local Blockbuster was all too happy to provide a copy for one great weekend. I hope it's on one of the upcoming Marvel Blast consoles from At Games, that'd be freaking amazing. 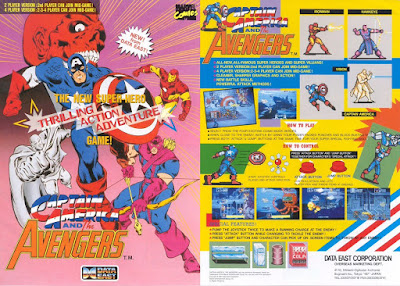