I don't care what anyone says, I love Action Masters. It's hard not to they're great toys. Of course some folks have a hard time accepting Transformers that don't transform. That's fair. Me, well, between the partners and vehicles transforming (not to mention the Action Master Elites) the idea of conversion is retained. Not to mention one critical point.

It doesn't faze me at all. The toys are just great looking representations of classic characters as well as introduced new characters as really good action figures. The commercials really sell it too, I love that original animation. The Optimus Prime Armored Convoy vehicle was reused in Microman, which worked perfectly. Part of me wishes there was some sort of return to the idea. Super 7 has ReAction figures of Transformers coming. That's pretty close. Ideally, I'd like figures that match the sculpting style of the originals along with reissues sold in blond boxes. Not only because I'm crazy for blind packed toys, but I'd think that'd be pretty great. And it's my damn site, so what I think is pretty much what goes on here. 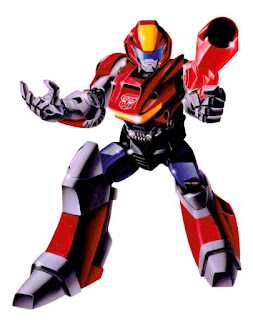