It's damn near impossible to not love this commercial for Super Ghouls 'n Ghosts. Back when the Super Nintendo was new, I was entranced by the ad. Here we have some catchy music, clips of classic horror mixed in with game footage. Last weekend before we headed out to ToyLanta, I'd play some of the arcade Ghouls 'n Ghosts while the wife was getting ready. I spent some time trying to figure out which of the original three games was my favorite. As much as I love Ghosts 'n Goblins, the later two are better games. Though both versions of Ghouls rules, it's a hard line to draw which one is better. Though either of the three you play is a safe bet for a good time. 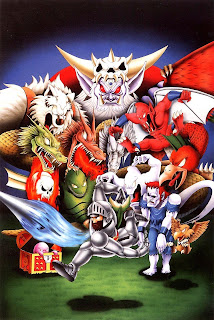