That is a good looking trailer 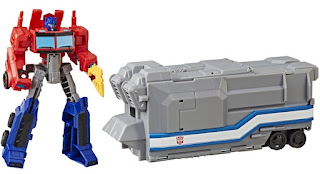 It appears that Cyberverse Warrior Class Optimus Prime is getting released at some point with his trailer. I have been hemming and hawing over the regular Warrior figure on the shelves as well, it reminds me of Action Master Optimus Prime. Mainly due to the orange axe making me think of the orange guns. With this trailer set, you get the same figure... but now with a trailer! The trailer has some neat styling to it and looks like it can serve as a bit of a base as well as carry a similar sized Autobot who's either too lazy to make the ride, or needs a nap. Seeing as I've been doing the ol' hem and haw two step (which probably looks like a pee pee dance) at Target, I think I 'll wait for this edition instead. Because just like when I saw 'Dude, where's my Car?', a trailer can sell me on anything. That and I was at the dollar theater.