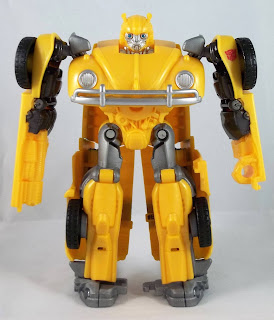 I've been a fan of Energon Igniters figures since first learning of them. After completing the first series of Power and Speed Series figures, I decided to dip my toes into the next class of figures. A Power Series figure is around $9.99 at my local Walmart, while a Power Plus is $12.99. For those extra three dollars, you get the Power Core gimmick block which is compatible with all Energon Igniters figures, even the ones that don't include one. 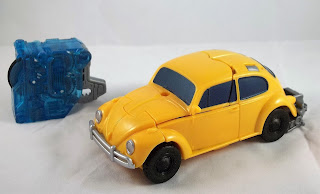 I'm admittedly caught up in Bumblebee mania. With all the hype surrounding the upcoming movie and just the general joy of seeing him in his traditional Volkswagon form, it's hard not to. I grabbed the VW version as...duh and boy he's an interesting figure. The VW car mode is a little shellformer in nature. It's most noticeable in Bee's legs where it kinda-sorta is just there. Bee's back and legs are formed by the car kibble with the front leg parts just sorta folding in front. It's not the toys strongest point. If hollow Transformers turn you off, you'll not like this.

As the Power Core gimmick block is the only included accessory, Bee's left arm is molded in his movie incarnations signature gun formation. In robot mode the toy doesn't have more than basic articulation and the transformation is simple. I knew going in when I decided to collect Energon Igniters that I was buying more simple toys, so this doesn't bother me. Admittedly, I bought this toy mainly for the car mode. I don't know when I'll get tired of seeing classic VW Bug Bumblebee on shelves, though I'm loving it right now. 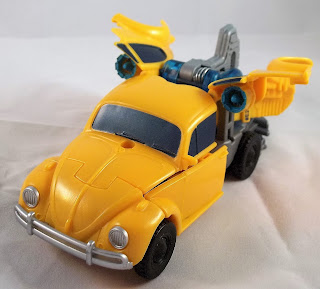 Like Power Series and apparently the larger Nitro Series, Power Series Plus toys have an attack formation in vehicle mode. It's nothing fancy, just some fold out guns that add a little charm and firepower to the toy. It's in the mode that you can attach the Power Core gimmick block. I had been mislead prior that the block added lights and sounds when it's much more pleasant and simple. Essentially, it's just a push button motor than drives the car around. I'm not to proud to say that there's a lot of fun in that simple gimmick. Kinda wish I could attach it to other toys and vroom them around the floor.
Autobot Autobots Bumblebee Bumblebee movie Energon Igniters power series plus toys Transformers Zone Base