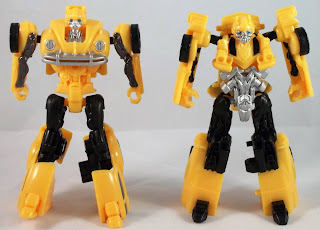 Since both the VW and Camaro versions of the Speed Series Bumblebee share engineering, I included them as the same post. Like the Optimus Prime of the Speed Series, Bumblebee finally gets a new legion style toy as the past few movies have been steadily using the ROTF mold. While that was a good toy, this is a big step up. Just a much better toy. While the Volkswagon Bug looks closer to the traditional Bumblebee we're all used to, it actually shares engineering with the Camaro version based on the 2007 movie that's just as well known. The transformations are almost identical, save for a little wiggle here and there. Though I found the Camaro version harder to transform as his car parts were harder to work around. At $5 a pop, these are great figures and since it's Bumblebee's time to shine with the new movie, it's hard to ignore all the fun toys he has on shelves. I really like these guys and hope for a million recolors. Like all Energon Igniters, they are Power Core compatible. Great little toys.