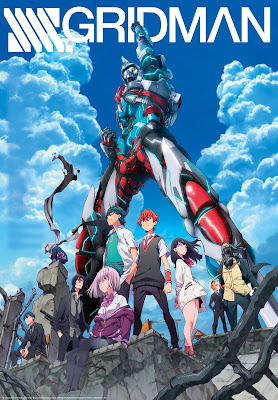 This weekend I was able to catch up on the first two episodes of a series I've been anticipating for awhile now, SSSS. Gridman. This is an anime Gridman series that's an all new cannon, but the creators insist isn't a reboot or remake. Gridman, of course, is a classic tokusatsu show from the 90's that was released in America (with new teenager scenes in the vein of Power Rangers) as Superhuman Samurai Syber-Squad (something I've talked about quite a bit here). In short, I loved it. It has a different vibe from the original series. It's a little sad, with a touch of comedy. For instance in one scene, as Gridman was fighting a kaiju, his partner Sho was trying to find a weak spot on the kaiju leading a quip that they always have a weak spot in the Ultra series (both are made by Tsuburaya and have obvious similarities).

Adding to the drama is that our hero, Yuta, has amnesia and cannot remember his past. He can see kaiju before they materialize, leading to foreboding shadows in the background. The whole show has a great fever dream like quality which matches the somber mood and how I can imagine life would be for an amnesiac. He's drawn to the computer in which Gridman communicates with him and understands enough that he's part of the whole Hyper Agent scene. I really dig the who dreariness of the show. It's got a charm of it's own and making the entire story kind of haunting. A show like this can be a little over the top, so giving it that downer mood sets it apart and gives it character.

I'm sure if you're in the same circles I am, you've probably seen all the posts about the large number of Transformers Easter Eggs in the character design. There's tons of it, with more getting found practically every hour. I wonder if that's going to continue or if it will curb off at some point. That was super fun to spot out. Joy kills magically had a problem with it (heaven forbid something be popular), but it was great to watch so many people point it out with pure joy. I know I was personally thrilled with it and continue to do so as more and more gets pointed out. It's kinda amazing.

It's great to see something I've liked since I was a kid make a return after 20 something years. I still remember waking up early every day to watch SSSS before going to school. I still watch old episodes of it regularly, as goofy as it may be. I hope to get some of the new toys from this series as the updates to the classic designs look great. I suggest that if you haven't already checked it out to do so. The show kicks gigabutt. 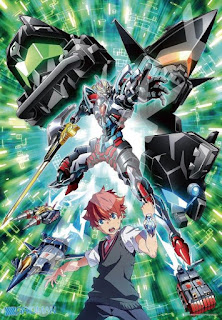