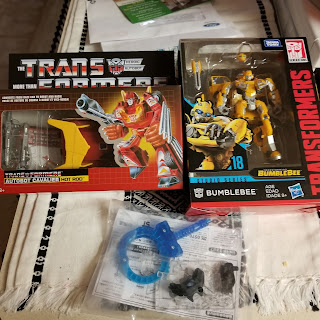 Actually, quite a lot. Saturday after I got home from work the wife and I went to go visit my mom who lives about 2 hours away. While we were there, we did some shoe shopping (I got some neato blue sneaks) as well as check out that Target's Halloween section. They had a great layout! Unfortunately they didn't have any TF's I was looking for. Which is ok, because on our way out we checked our P.O BOX and it had a gift from my pal John! John sent me a cool weapon pack from Drive Head. It's a translucent version of Sonic Interceptors weapons! Neato!

We ordered way too much pizza and watched Black Panther before heading back home.

Sunday, I woke up early to pick up our grocery order and a few more things we needed while the wife slept in (she drove home the night before). The store had a few substitutions for some items which I rejected and went inside to pick out something else which somehow led me to the toy section and whammo bammo there was reissue Hot Rod sitting on the shelf. I grabbed one before picking out tortellini.

On the way home, I somehow found myself inside Target where I picked up some early Christmas shopping for my wife. While they didn't have any of the Speed Series I was hoping to find, they did have the new Studio Series Bumblebee movie figure...somehow he ended up in my basket. Weirdest thing.

I got home and was welcomed by not only a fresh cooked breakfast, but also my super duper Walgreen's info friend leaked me some new Siege listings including a Ratchet that was previously unknown and possibly exclusive to Walgreen's. I decided to go ahead and forward the info to my friends at Tformers before posting here. I wasn't planning to break out my laptop, but wanted to help get the news out fast.

While eating breakfast, I caught up on my DVR and man Super Ninja Steel had a surprise. 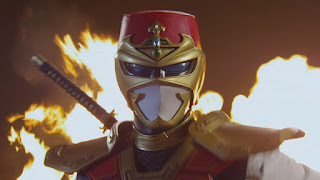 While I'm aware Jiraiya made an appearance in Ninninjer, I didn't anticipate the footage in Ninja Steel. It was super cool to see Metal Heroes make a Power Rangers showing and with his new American name Space Sheriff Skyfire (if only Greg Berger did his voice), I really hope there's a surprise toy of him in the toy line like the Evil Red Ranger.

I ended the weekend like I do most, in bed with the wife watching spooky videos before we go to sleep. Something about weird things Drones manage to video makes for a good time.