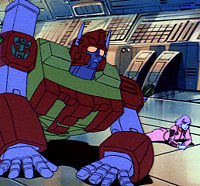 A recurring argument within the Transformers fandom is things like Blue Bluestreak, Transformers the movie in widescreen, and other various things. While such things as false memories can be spread easily and gain traction quickly (hey... I do remember that come to think of it) a lot of people believe in such things as the Mandela Effect creating such instances (Berenstein Bears... what do you mean Berenstain Bears?... wait what?). Now such things are usually be dismissed by people who'd rather say such things as 'Occam's Razor' instead of 'the simplest answer is usually the right one', which I guess is less words but non-the-less super duper pretentious. It's Halloween time, it isn't the time to be serious and super logical. It's a time to be spooked and laugh at yourself when the ice maker scares the crap out of you.


Look, they were the Berenstein Bears ok?

The Madella Effect is kinda spooky in theory and the idea of it can really get you thinking of various times in your life where you swear something was different than it is. My point is maybe there's plenty of these reality holes all throughout Transformers and we can't help but thinking these various things because maybe it really happened in a timeline we were previously in. Perhaps a good part of our current population is from an alternate reality that they were transported from when theirs was destroyed and because that's just the way it works. We are don't know any better as our perceptions of things have always been one way. I mean, when so many people swear they saw TFTM in theaters and it was in widescreen... there's got to be something to it. And when I mean something to it, I mean of course the most crazy thing possible and not something logical.