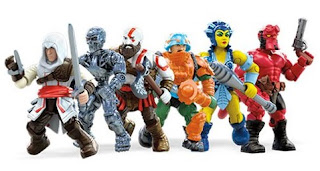 Just as I finally was able to track down series 3, series 4 should be arriving at my stores soon. I say should as series 2 and 3 took a bit of hunting. I've already seen online retailers pricing them around $16 each, which is a big nope as these things are generally $5-6 at standard retail. Though I am excited for them, or at least some of them. The big draw for me is the Masters of The Universe guys. I was a big fan of MOTU as a kid. The 2002 line didn't light much of a fire for me and while I think the current classics figures are super cool, mini figures like this is exactly what I want for updates of the characters. Though I'd really like to get the Super 7 ReAction versions, those are just neat.

The Terminator T-800 Endoskeleton is also a must have. He'll go with the other Terminator figures I've gotten quite nicely. As a Terminator fan, I'm mainly interested in parts 1-2 with T2 3D thrown in. The newer movies haven't grasped my interests as much as those two and these figures are really serving that specific want.  I may get Hellboy. Not sure about that one. I like the character, but have never been outright drawn to buy a toy of him. Kratos is cool, I've certainly enjoyed his games, but I'm not sure if I want a toy of him either. I wish I had any sort of enthusiasm for Assassins Creed, but I don't. It's clearly a popular series, but I've never been drawn to it.

I'm hoping with the timing of this series release, they'll be easy to find. Most online stores have them shipping in September, which makes a retail appearance realistically by October. I can see them in a stocking stuffer display at Target or Walmart and really hoping they aren't as challenging to find as series 2 and 3 was for me.
at September 11, 2018
Email ThisBlogThis!Share to TwitterShare to FacebookShare to Pinterest
Labels: Assassins Creed, God of War, He-Man, Hellboy, Kratos, Masters of The Universe, Mega Construx, terminator, terminator 2 3d, the terminator, toys, Zone Base