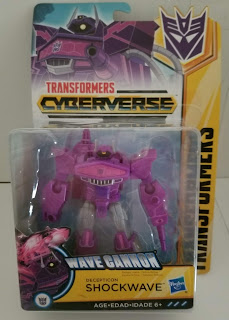 I've said I only plan to buy the occasional standard sized Cyberverse toy, because there is some super cool figures that I just need. Shockwave here was impossible to walk away from. His normal design just lends itself to the Cyberverse cartoonish styling. The new Warrior class for Cyberverse is different from the Warrior class from Robots in Disguise in that each one has a much more prominent play feature. Shockwave for example has a 'wave cannon'. I've talked about the really sharp packaging before, but just look at that. Those colors are so sharp! While I didn't need to use the instructions, I found myself looking through them as the colors were on those as well and made for a really nice looking pamphlet.I wish they'd include some story blurb or a bio to take advantage of that good looking paperwork. 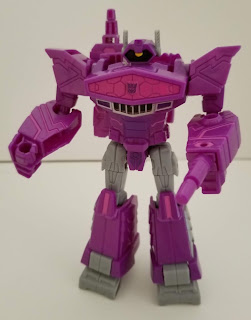 Just look at that darn Shockwave. He looks really nice in this toy and aesthetic. I do wish he had a few more paint apps to bring out more of that sculpted detail, but for $14.99, there's going to be some compromises. I pay about $16.99 for a Generations deluxe which has more paint and 20$ for a Studio Series deluxe which has the more premium treatment. Siege toys look to be going towards that as well, so I assume they'll be more premium as well. So $14.99 is going to have a few concessions to make it cost a little less. It is what it is. Shockwave as some hollow parts and thinner plastic as well. He's pretty light, but was still pretty sturdy and didn't fall apart or anything. So honestly, it's not much to complain about, for me anyway. He has a fair amount of articulation, but his head doesn't move. Which isn't a big deal, but does seem a bit odd considering. 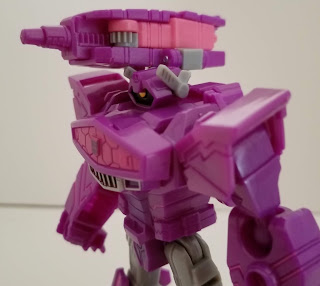 So that wave cannon on his back can fold over to mount on his shoulder for some fighting action.The cannon actually pegs into his back pretty well, and that peg is the lever intended to use to deploy the wave action. By the way, do you notice his antenna? There's not room for the cannon to fold down without hitting them, fortunately they can move forward to make the needed room. I'll be honest, I didn't care for that. There's nothing really wrong with it, I just didn't like it. The cannons lever moves to fold out the laser waves (snicker) of the wave cannon firing during that fight.

I don't know if this is just one mine, or on all Shockwaves, but those fold out laser waves (snicker) didn't work well. The outside one did just fine, but the inside one stuck and didn't want to deploy. Maybe I got a weak spring. 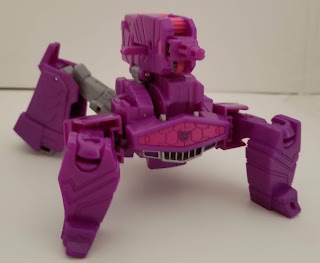 Aside from his Alternator toy, Shockwave has never turned into a realistic Earth based form. In Cyberverse this continues as he turns into a spider tank. Spider tanks have been used in Transformers before and work for a cool sci fi tank variation. I almost wish this was a different character though as the mode seems more suited for someone more eccentric than Shockwave. It looks great though. The wave cannon is more present here, though you have to unfold it to let the wave shoot out.

Warrior Class Shockwave is a good figure and really sharp looking despite a few flaws here and there. The flaws are mostly easy to ignore (and in some places are subjective) and it's a pretty good figure. I'm happy to have him and am reminded I need to get Cyber Battalion Shockwave as logic dictates that Shockwave toys are always a good choice.
at August 05, 2018
Email ThisBlogThis!Share to TwitterShare to FacebookShare to Pinterest
Labels: Cyber Battalion, cyberverse, fandom, Robot in Disguise, shockwave, toys, Transformers, warrior class, Zone Base