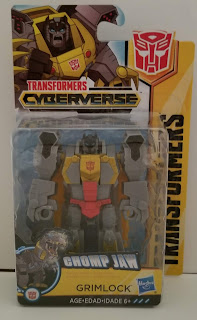 I've been looking forward to getting these new Cyberverse Scout figures for a while now (as regular readers already know) and was really happy to finally find my local Target newly stocked with the early waves of Cyberverse toys. I got Grimlock and plan to get the others later as I want to stretch out the process. It's more fun to get one or two things at a time that a bunch all at once with a long stretch in between. The original scout class was at the time a name refresh of the former basic class that came began with Cybertron, with basics going back to Beast Wars. The class was phased out by the Dark of the Moon toy line. It was replaced with the original Cyberverse sub line that renamed the original Legends class to what's still called Legion class and introduced the Commander class, which later got rebranded Legend class. Often newer fans will get older scouts/basics confused for Legends, which isn't the same... though it's not hard to understand the confusion. We now have this new Scout class that's a new thing all together. 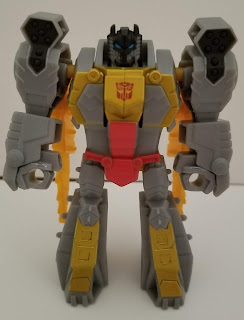 Grimlock is a pleasantly squat and chunky little guy. My plan for Cyberverse is to focus on Scout class with the occasional full sized figure. My main focus is on Generations, Studio Series, and other lines more aimed at an older fan such at myself. Like Rescue Bots and Robots in Disguise, Cyberverse is more intended for younger children and I only have so much money to spend. Being a fan of smaller figures, like Legion class and such, these Scout class figures are just the thing. I get representations of the characters from the upcoming show, a fun inexpensive Transformers line to collect, and feed my love of smaller toys. 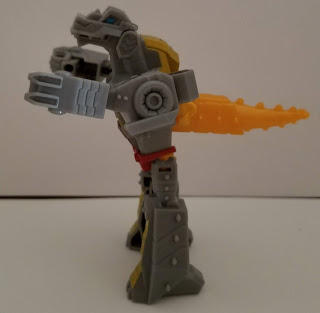 Remember when I said these new Scout class figures are a new thing? Well, I wasn't kidding. Upon first glance, you'd think they're bigger versions of Legion class figures. They certainly look that way and feel like that in robot mode. It's got a pleasant heft and hand feel, though they have a strange gimmick. The transformation is an odd half transformation/battle mode. If not for the cartoonish styling of the figures and the lack of definition of the gimmick, it can look like a more cheap attempt at a Transformer and has been called worse by more jaded fans. Which isn't unfair as the gimmick isn't described in much detail. Cyberverse is a very play heavy, gimmick laden line. So the Scout Class is given a 'gerwalk mode' gimmick which I can't help to think is also an attempt to differentiate the more bargain line from the bigger and more expensive figures. 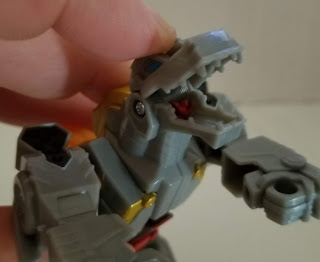 Part of Grimlock's gimmick is a spring loaded chomping mouth. Which is a cute standard play feature in a lot of animal based toys. I suppose Grimlock's battle mode here is him stomping forward munching metal and handing out knuckle sandwiches. It's a silly little thing meant for a seven year old to play with in the backyard and not deter his parents from getting the bigger toy later on (see mom, it's not the same thing). For a 40 year old lifelong fan of the franchise, I got a cool figure of Grimlock from the new cartoon.

I'm happy with my new Grimlock figure and still plan on buying most if not all of these new Scout figures. This is going to sound like I'm making excuses here, and maybe I am. But I've been buying Transformers for 35 years, so I'd like to think my experience in doing so has prepared me for these things. The first figures from a new line are always the worst. Aside from mold reuses, future figures in the line will be better as the design team will essentially find their groove with these. So I don't know if they'll fully transform or the battle modes will improve, but I have faith that they'll get better. Grimlock is pretty cool though as is, I wouldn't mind getting some cool repaints of his mold later on.