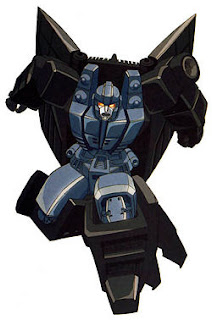 Recent rumors of listings of Siege Decepticons in store systems are suggesting a new version of the Micromaster Air Strike Patrol. Which leads me to do a happy dance, a joyful jig, a delighted squirm... I should stop. My co-worker looks uncomfortable. Either way, fingers crossed for a new Whisper. I like him.

The full lineup of Siege Wave 1 toys is as follows: