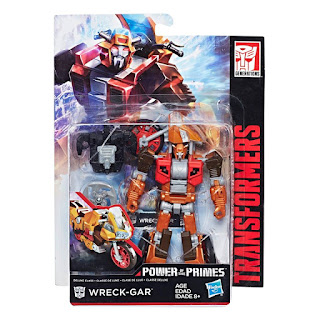 There's been a slow trickle here, a little drip there regarding the Walgreen's exclusive Wreck Gar I've talked about here before with nothing more than some pictures popping up a little while ago of a Combiner Wars Groove repainted and given a new head as Wreck Gar to go by. While everyone assumed it was more evidence of this cryptid of a toy seeping out, still no one really knows anything. Well, some official pics of the toy have found there way all over the internet (you can see them at any TF news site or group) and boy is this toy a weird one. You got CW Groove with a new head and deco to be Wreck Gar. Then you have the Generations/Reveal The Shield Wreck Gar's weapon (from around 2010/20111). Then instead of CW hand/foot pieces, you've got the POTP hand/foot/Prime armor thing. The former makes sense as it's released in POTP, so might as well tie in the gimmick. The mold makes sense as it's a completely compatible combiner limb deluxe that turns into a motorcycle. Not to mention, the CW molds are recent enough to not be lost in a warehouse somewhere. But man, that axe thing is out of the blue. Realistically, they could have used the hatchet from other CW deluxes to give Wreck Gar his trademark axe, so it's a little weird to pull a weapon tooling from so long ago out of the storage abyss.

I'm sure the toy will be available in the fall as the past two Walgreen's exclusive Transformers have been. I'm looking forward to it too. I quite likes Combiner Wars deluxes and Power of the Primes as an evolution of the idea. Not to mention, I just plain like Wreck Gar. So as usual, I look forward to that evening this fall when I take a break from work to visit my nearby Walgreen's and grab this guy and a pack of gummy worms.
at May 21, 2018
Email ThisBlogThis!Share to TwitterShare to FacebookShare to Pinterest
Labels: Combiner Wars, deluxe, exclusive, exclusives, Generations, Power of the Primes, reveal the shield, Transformers, walgreen's, Walgreens, Wreck Gar, wreck-gar, Zone Base