Making the Cyberverse in my mind-Turbo 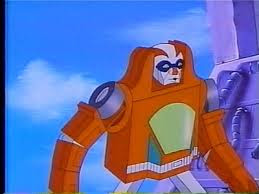 One thing that get's old to me is the immediate go to characters to fit certain roles. Need a veteran, well get Ironhiode, Kup, or Ultra Magnus. So what if there's an episode of Cyberverse where Bumblebee remembers his rookie missions? Here he is in a squad, a complete greenhorn in an unforgiving environment for newbies. There's this cool Autobot who's been around for awhile, but not some old dinosaur who I can't relate too. Man, I wish I was like that guy. Problem is, I don't think he likes me very much.

Basically, I could see Turbo as that cool seasoned guy who begrudgingly takes Bumblebee under his wing (and tries to push him out at every chance). It's not that Turbo is a jerk, he's just here to do his own job and doen't want to deal with some kid. Somehow though Turbo really teaches Bumblebee and sets an example of how an Autobot should be and pretty much (to his own annoyance) becomes Bumblebee's hero and everything he wants to be like. Turns out Turbo really cares about the kid and wants the best for him, just he's not the best at that kind of sentiment.

I chose Turbo for this role as well... why the crap not? Sure he's a Gobot, but Hasbro owns Gobots and look at him. He's that perfect cool been around the block kind of guy. A name like Turbo and a red sports car? Sure, he's got to be a little self sure and maybe even cocky. He's well known enough to not be a level of obscure that does nothing but self service an ego (hi nerd hipsters, nobodies impressed), but just off the radar that if the character never shows back up it was just the right amount of screen time.

I think I've had my share of mentor like figures who would obviously rather not have been stuck with me, but also wanted to see me succeed. I've had more folks like that around when I've been new somewhere than Ironhide or Ultra Magnus types. To me that's more relate-able and in a story about where Bumblebee came from, I'm sure we'd want to relate in the situation.
at April 12, 2018
Email ThisBlogThis!Share to TwitterShare to FacebookShare to Pinterest
Labels: Bumblebee, Challenge of the Gobots, cyberverse, Gobots, La Revanche Des Gobots, rob imagines things, Transformers, Turbo, Zone Base