Despite all the cool stuff for Shattered Grid going around (man, I'd love that Lord Drakkon figure... or an Imaginext of him... actually that'd be awesome) I've been more focused on developments from Beast Morphers. The entire Hasbro involvement has really caught my attention and I'm super interested in how things will go. I still have the back half of Super Ninja Steel to go before I even get to this show that won't even air until a year from now, and I'm in no rush for the year to fly by, but man I'm really focused on this. So I've started taking note of the casting calls for the show and comically enough saw one with the typo Power Rangers Beast Mode (which isn't too bad of a name) that I wish I could find again to link to. One that really caught my eye was this one .

While Hasbro has the master toy license from Beast Morphers going forward, they haven't acquired the IP yet. Yet the show is listed as a Hasbro/Nickelodeon production instead of a Saban/Nickelodeon production. I don't know if this is a typo like the prior mentioned Beast Mode (really wish I saved that link) or perhaps news that hasn't come to light yet. Either way, it's interesting. 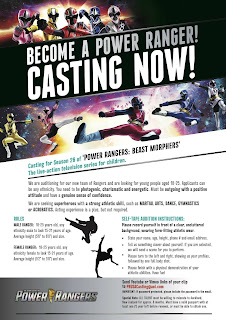