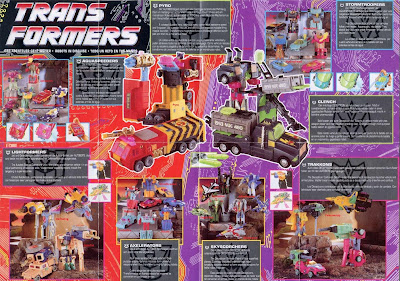 Late G1 was pretty interesting in European countries. Worldwide Transformers kept going strong, while in the U.S it was on hiatus for a bit before coming back as Generation 2. As the line started re-branding some of the products being released in those European regions began the slow shift to the new G2 make over. The newer toys had the new G2 symbols and the packaging began to resemble what we came to expect during Generation 2.

Eventually Transformers got the full name on packaging and Transformers Generation 2 was running strong. On this booklet, you can see many of the toys that got released in G2 here in the states as well as some familiar faces that stuck around as fan favorites. A few got re-released in Generation 2 packaging (some even with new names).


I'm not too proud to admit that I've very jealous of you lucky people in these countries that got these awesome bots at the time.
at February 09, 2018
Email ThisBlogThis!Share to TwitterShare to FacebookShare to Pinterest
Labels: Europe, European, g1, g2, generation 1, generation 2, generation one, generation two, Transformers, Zone Base