Over the weekend the news regarding details over the new Transformers cartoon called Cyberverse was released online. Ever since the first bit of news regarding the series, many fans (including myself) speculated it would have a more traditional G1 looking aesthetic (going by all the new art getting used on licensed products) and we were right. Using what Hasbro is referring to as the Evergreen designs, this cartoon will look awfully familiar. Evergreen meaning traditional looking, so you see Bumblebee and that's the same Bumblebee on everything (excluding movies of course). The designs are basically classic characters updated for modern times and that's going to be it going forward.

The story is described as Bumblebee loses his memory on a mission and Windblade is helping him remember by recounting past adventures. So basically, it's going to be episodic and the initial set up will be under a story telling format (I figure the focus of the bumper segments will change as time progresses). I really like this as I really like more episodic storytelling as opposed to long drawn out arcs. Not to mention, it gives the writers more room to flex their creativity instead of forcing the characters into an ongoing arc.

I'm pretty positive in my outlook going forward, it sounds like a fun show. Once RID wraps up in a few weeks, I figure this will debut late winter or early spring (it debuts in 2018). I'm really interested in the Japanese version as I really want to see what manga or story pages comes in addition to this. Not to mention, this is the perfect setting for one off stories like fan club fiction or whatever. Instead of shoehorning a exclusive into a portion in a continuity and making an overly complex system of continuity... it's just another adventure in a general setting. Considering an earlier version of this blog was called Cyberverse (after what was then a line of legion/legend toys), I obviously like the name. 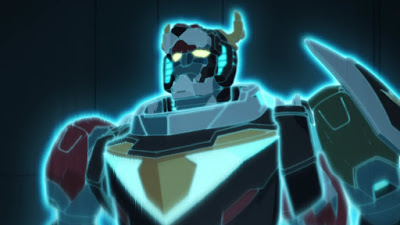 Also this weekend the 4th season of Voltron was released on Netflix. With the new smaller season model firmly in place as of last season, it's really easy to binge right through the new episodes in the same time you'd watch a movie, though it does leave you wanting more sooner. Fortunately the new smaller season model will supposedly reduce that in between time. This season was excellent. Absolutely excellent. Without going into spoilers as much as possible, the show really delved into things and really set the stage for bigger things. Not to mention, episode 4 'The Voltron Show' was absolutely hilarious. This is a show that started off good and has stayed good. It's great to watch a robot cartoon without the mental conceit that it's a cartoon (so you gloss over some stuff). Not to mention, whenever my wife is in the same room as me while watching a robot cartoon, she doesn't pay it too much attention. This one generally keeps her attention and while she's not particularly interested in my silly robot shows, she does ask a bunch of questions and I can tell it's got her hooked for the moment at least. A well written show will do that. You may not want to watch it, but you'll at least be entertained while it's in your view. Either way, I'm chomping at the bit for season 5.
at October 16, 2017
Email ThisBlogThis!Share to TwitterShare to FacebookShare to Pinterest
Labels: cartoons, cyberverse, evergreen, Netflix, super robot, Transformers, Voltron, Voltron Legendary Defender, Zone Base