Philosopher, scholar, soldier, leader -- Optimus Prime is all this and more. To peace-loving beings across the galaxy, he is the living symbol of freedom. A true beacon of hope that shines against the forces of darkness. To his followers, Optimus Prime represents a bottomless well from which they draw courage and strength. And to the evil Decepticons, he is the hero in the universe who can shatter their dreams of conquest. He drives the Armored Convoy, a trailer truck with communications, fueling and offensive capabilities. It divides into an interceptor shuttle and fortified battle headquarters equipped with a multitude of defense weaponry, including heat-seeking ballistic buzz bombs, a long-range photon cannon, rapid-fire disintegration laser and double-barreled pom-pom cannons. 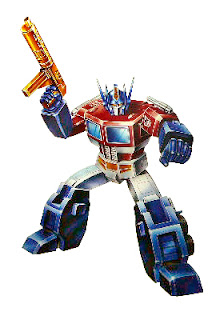