In which I talk about old comercials 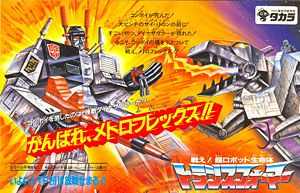 For some reason, I've always loved commercials. Well, I'm not concerned about the newest laundry detergent commercial, but old toy or cartoons? Yeah, love it. I always laugh at myself for my YouTube habits. While most people with my hobbies are watching reviews or play through videos, I'm mainly watching old commercials or some nonsense tv show. Before YouTube, I remember this TF fan site that was just an archive of old commercials in real media format. At one point I was even in talks with the owner to take over it as he was looking to offload it. Somewhere I still have that CD-RW with all the files. Sometime while I was watching these silly old ads, it occurred to me it probably would make a somewhat decent post. So uh...


Overlord is one of those oddball Transformers, one of the big bad guys of Masterforce, he found his way to European release. This is just a simple advert that sells the toy with some great animation. I like how energetic the voice over is as well.


Turbomasters and Predators were some of those late G1 going into G2 that never came out in the US. Personally, I would have loved them at the time. I've got a few, and some of the molds were released in the US under other lines. When I see all the homages to older figures in Generations, I feel these really awesome toys are overlooked. Sure, Thunder Clash gets attention (as does Overlord), and Scorch got an update as a BotCon toy (as did Thunder Clash), but man I'd love more focus.


G2 era toys never fail to fascinate me. They are the perfect realization of the classic Transformers concept. While toy technology has went forward and these are older figures, there's no denying the charm they have. When G2 gets homages, it's usually towards the neon repaints of G1 figures and mostly ignoring the original creations (aside from the occasional nod). When I see pics of the upcoming Tiny Turbo Changers, part of me see's these smaller G2 toys and think the engineering could be shrunken down to make a wonderful non movie series.


In an earlier post, I talked about the infamous Animorph Transformers toy line. And while I said enough there, I figured it would be a good ending point to this post. Maybe one day those 'bastard Transformers' will get their moment in the sun. Until then, I'll just be content with pretending to be some robot toy hipster who enjoyed something nobody else did.