Like many others I was really looking forward to the new Titans Return Fortress Maximus. Several places had him for pre order and I placed mine at the one place I knew I could depend on. Good old Toys R Us, that monument from bikes to planes, to video games. I had rewards points waiting to cash in on this pretty big purchase to save money.

In fact the rewards program is one of the things that keeps me coming back. TRU has lots of sales and when combined with rewards points, you can really get some good deals.

So I placed my order with a really good discount and waited for shipping day to arrive. Star date: July 20th 2016. Which I thought was an odd date as other stores were already shipping, but hey, I got a good price. So, I can wait a few extra days.

The morning of the 20th came and I was excited. I actually had a not so great night at work and was looking forward to that shipping email when I got home. Sure enough in my inbox was a email form Toys R Us.

Imagine my disappointment when the order was delayed.

I was annoyed but just reassured myself it would come soon enough. A week later another email from TRU. Still delayed and if they couldn't fullfil the order within a month they'd give me a refund. Uh...

So, I called the customer service line. You see, not only had other stores gotten stock shipped, but the figure was showing up in Toys R Us stores. So why is there a problem shipping mine?

The representative told me that stores were stocked before pre orders were filled and they ran out of stock. They also couldn't use the ones in stores for pre orders and those who did would have to wait.

So in other words, customers who paid in advance got screwed.

Part of me feels robbed.

So here I am still waiting as I used my rewards points (the term is starting to feel ironic) to get a great price. Other have publicly told of canceling their pre orders and buying it either at TRU retail or from somewhere else. Because you know, getting screwed makes you want to take your business elsewhere. Personally I'm conflicted as my I got a great price, but also got a pinecone stuck up my behind for my rewards.

I could cancel my order, but hey... what about those points I earned? That's store credit. That's money, my money that I earned for being a loyal customer, that got taken and wouldn't be returned. Like I said, I feel robbed.

So I remember asking the customer service representative if I could get my order changed to store pickup in the case that I saw one at a local store. I was told it could be done easily if the occasion occurred. I decide to check the site to see if the figure if available for store pickup at any of the locations near me.

Theoretically I could run over to one first thing in the morning and problem solved. Ok, problem solved with bruised feelings and kinda not wanting to bother with the chain anymore. I mean, competition is literally at my fingertips. I could literally buy something from another store while in the bathroom.

So I look at the page for Max and what do I see?


Am I seeing things? I just saw a friend tweet his disappointment that his most recent call to customer service gave no new info on shipping dates. But right here on the order page, in plain easy to read and decipher wording.


So now I'm confused. Do I remain patient and brush it off? Do I go ahead with my plans to store pickup? I'm laying next to my wife in bed, writing this on my Samsung Galaxy tablet bought at Toys R Us (I clearly said I was a loyal customer). Her Samsung Galaxy tablet is on her nightstand, I bought that also at Toys R Us (think they'd want to loose a loyal customer?). In the next room over is my computer/toy room. It's stacked to the ceiling with Rubbermaid totes and boxes filled with Transformers. There's thousands of dollars paid out to Toys R Us sitting in that room.

From childhood to adulthood. Gifts to self purchase. I'm 38 and have literally been shopping there my entire life. When I was a kid, it was like Disneyland to me. I remember my last visit to the store I had been going to since I was a child. The same one that was my first. It was closed due to a newer location opening and I was there at the last day of it's operations to say goodbye to an old friend.

In the bathroom, on the back of the door was one of those clear plastic things used to hold paperwork. I assume it was for checklists at one time. I never once saw anything in it, except for a small piece of plastic. You know those plastic frames, the ones accessories are on in the toy boxes? It was the corner and side of one of those. I had seen that little plastic piece in that plastic thing since I was a child. I made a point to look at it one more time before leaving the store. I contemplated taking it. I had never touched it or anything before. Just saw it every time I had to use the bathroom in that store.

I thought about taking it as a reminder of that very special place that was going away.

Then common sense about handling an unwashed piece of plastic that had been in a public restroom for at least 20 years kicked in. At that point it was probably more fecal matter than plastic. So I took a picture.

That's how loyal I've been to Toys R Us. I took a keepsake of a piece of garbage in the bathroom. I've been a loyal customer for a very long time. There's been several times that I was the only person in the store aside from employees. So imagine how much something would have to burn me to consider never buying from them again.

That's this situation. I live in a world where I can order anything from anywhere in the blink of an eye. My only reason to continue my shopping there is personal satisfaction. So, when that's taken away in a manner that not a single person I've talked to can make sense of. In a situation that every person I've talked to about it has said, 'that's not right'. Why would I ever want to go back?

So, I've decided to call the customer service line in the morning. Perhaps the site was right and I'll get Fort Max here soon. Maybe they'll attempt to make it up to me with some sort of peace offering like a coupon or something as a matter of apology. Like when the cashier at McDonald's throws in an apple pie when I've had to wait a little longer than I should. Maybe I can do a store pickup and get taken care of in a manner that calms me down over the entire ordeal.

Or maybe, I'll cancel my pre order and take my business elsewhere.

*UPDATED THE NEXT MORNING* Spoke with the representative, the shipping date is a hard date and if there are any problems I can use the rewards points until they expire if I cancel. So, if it doesn't ship on the 22, I'm going to just get it in store. I was happy with my phone call and the representative was pleasant. So, I'm happy. My main beef was a mishandled situation and the fact that I would get screwed over the rewards program. It doesn't look that way now, so I'll just hope everything goes well from here out. This isn't the first time I've been unhappy with TRU, but each time I've came out ok. So, in one week, we'll see.

I still don't understand why they didn't fulfill orders first. 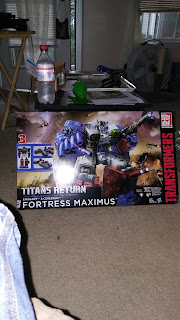 He shipped when they said he would and got here in two days. In fact the only reason I'm posting this the next morning is because he got here right before I left for work.

Thanks Geoffrey, I knew you could do it.
at August 15, 2016
Email ThisBlogThis!Share to TwitterShare to FacebookShare to Pinterest
Labels: customer service, Fortress Maximus, Generations, Hasbro, screwed, stupid, Titans Return, Toys R Us, Transformers, unhappy