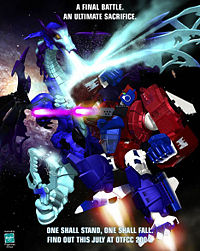 It may be silly, but I really miss OTFCC. After The famed 3H split and the BotCon name went one way and the official license went another, OTFCC came to be.

The Official Transformers Collectors Convention only lasted two years before Hasbro pulled the license and awarded it to Fun Publications. During those two years the fandom got very heated over the matter.

Personally, I looked past the organizers issues as I never thought they were any of my business and personally made friends with Glen who was putting his all into OTFCC. It was the rare instance that an official entity had the heart of a fan convention.

The included fan club at the time only yielded one issue of its magazine, but holy crap what an issue! Instead of the small pamphlets that we got in the Fun Pub years, this was a huge publication chock full of goodness. I held onto hope that more issues would come and reread it a million times.

The convention had its problems, sure, but man was it fun. The day the news broke that it was all over was a really hard day. I still remember feeling like I lost a loved one. I know, I shouldn't view it that way, but I do. Now that Fun Pub has lost the license, I can only hope whatever follows has the heart that OTFCC had.

Or at least comes close.