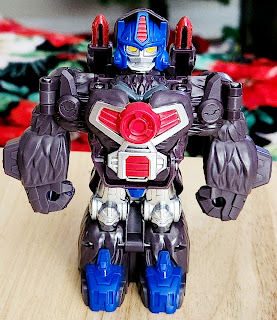 With the upcoming Rise of the Beasts movie bringing a much more mainstream attention to my beloved beast warriors, extra love for them has been out in force to reintroduce them to the world. I love it. Something I wasn't expecting was the characters featured in the preschool stuff. But here we are, and here is Optimus Primal as a toddler toy released in 2022 (yes it's 2023 now, but I wrote this in advance). There's another BW toy in the Classic Transformers Heroes Team line for smaller children of Alligator Megatron. I've always had a lot of love for that initial BW 2 pack. I hope to find it soon.

It probably goes without saying that Optimus here is a very simple toy. Meant for small, much younger children and not middle aged robot nerds (but here we are). Transformation is a simple pulling the toy into robot to beast modes and vice versa. There's no articulation as it's basically a larger, more simplified Turbo Changer. The transformation is the toy more than the figure itself. Like Turbo Changers, it makes a good figit toy, perfect for little ones to play with. The simple, cute sculpt makes Primal friendly and approachable. He's hard not to like, unless you're an asshole.

I really wanted this toy because as big fan of Beast Wars, and also tend to like oddball things like this. It also reminds me a bit of the Real Figure Transmetals Optimus Primal toy from 1999. That was something I wanted a whole lot back then and was super happy to get. Little weird things like that were a little harder to get back then. This toy is a lot simpler than that one, and bigger. Really, it's not that similar. But it does remind me of that figure for some reason. Sometimes things just stroke the heart in a certain way. I don't know if that's a good thing, but here we are. 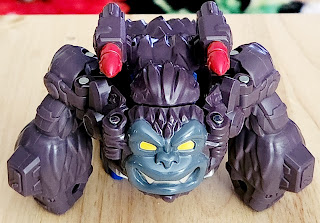