Pain in the Tail

Ever try to put a Boglins tail on? It's super hard, but it's even harder getting the dang little monster out of it's crate the first time. You see, the tail is a separate piece. There's a plug that goes inside it and connects to the main body. That plug is used to hold the Boglin in place inside it's crate. It is a damn act of nature to pull that plug out. That is the most stuck in place thing ever stuck in place in the history of things stuck in place. When you finally get that plug out, you put it through the tail and back into it's socket. Then the Boglin is assembled. Sounds easy huh? 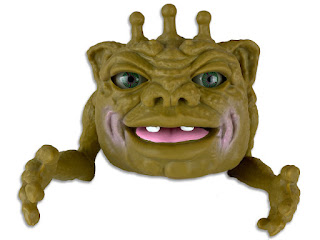