A little Green with Evil 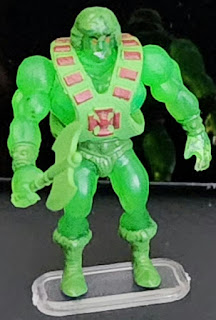 When I initially started talking about Micro Action Figures here, I intended to do group posts on various series. A Transformers post, a Masters of the Universe post, etc, ... and I totally failed to do that. So in attempt to talk about these cool little figures I like quite a bit, instead I'm just gonna talk about one at a time. Just to keep it simple. Today, we're going to talk about Slime Pit He-Man.

Slime Pit He-Man is a basic repaint of the already released He-Man figure. However, it's a pretty interesting one. Obliviously He-Man is representing himself recently slimed via Slime Pit (it's in the name) and is now a mindless zombie under Hordak's control. To emphasize his slime coated physique, He-Man is cast in translucent green plastic. I don't know why being covered in mind controlling evil sludge would turn you translucent... but it looks awesome. Meanwhile He-Man's clothing and axe are opaque. The mixture of can see through and can't see through looks fantastic.

The pictures probably don't convey that this figure is TINY. At just around an inch tall, He-man had movable arms and waist with an axe that can be held. The original use of this mold had more accessories, but I guess inflation affected that as the cost is still around the same. They still come with a stand. I really like these little toys, but finding them can be a pain. Thankfully, the Mrs found me this one. Slime Pit He-Man is from the newest series of Master of the Universe micro figures and represents a deeper dive into the series than the expected characters. I do hope to find more as I like these little guys quite a bit. There's even a micro Castle Grayskull now. Slime Pit He-Man is a great example of a well done repaint. Just changing some simple colors turns something completely recognizable to something really novel. 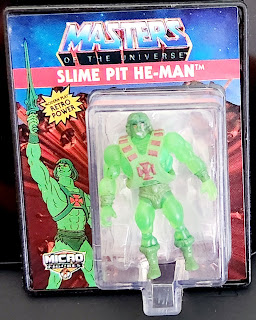