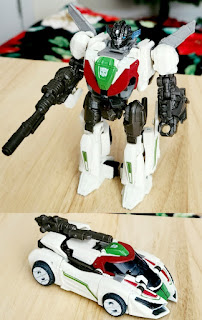 My toy backlog seems to know no limit, and yet, there's ones I hold off on just to feel the anticipation a little longer. Wheeljack is one of those types of toys. I got him in the summer and of course it's the Studio Series Wheeljack as he appeared in the Bumblebee movie (just in case you didn't know). I've been really into these particular figures despite not getting as many as I would have liked. Readers know just how much I loved the Bumblebee movie and these Cybertronian versions of the characters were a particular highlight. They successfully took the live action movies sci fi/tech look and applied it to the traditional Transformers looks very well. There's no wonder I'm looking forward to Rise of the Beasts as much as I am. Let's watch a little of that right now.

Damn that's exfiltrating. Wheeljack was in that scene, did you see him? I've always liked Wheeljack's design. It looks really cool. Here, it looks badass. That sci fi/tech works really well with Wheeljack's traditional design. I really like the colors on that design, in car mode it almost gives me Macross/Robotech vibes. Transformation is not terribly hard, but maybe a little picky in a few instances of getting everything into place. It's a fairly predictable transformation for a car bot, but that's not something I'd complain about. Robot mode is a little short like other recent figures, but it's substantial. The figure is fairly solid feeling with no noticeable hollowness. I'm fine if the hollow parts are from transformation (within reason), but there's just none here. I've noticed the aftermarket upgrade kits just kind of polish off the toy and don't make up for any lacking instances.

Like I've said before, I'm fine with the toys being a little smaller. Not just because I have a thing for smaller Transformers, but because I've usually felt they were just a little too big. Wheeljack is a good example of that. He's damn near perfect, and the smaller size keeps it compact and avoids unnecessary negative space. If there's an argument for the smaller sized Transformers figures of late, Wheeljack makes for a good one. There's a lot of articulation as well. You could pose him in all sorts of action scenes with that gun. I do wish Wheeljack's traditional shoulder cannon made an appearance as I think it'd add something. That's not a fault either. Just something that I think would really make an already good toy better.