Burnt Out, but in a good way 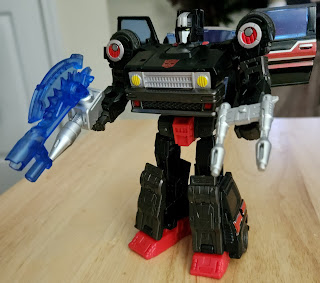 Burn Out is a repaint of the Legacy Skids toy with a new head released in the Velocitron Speedia 500 Collection. That Skids toy is a great toy, so it's no surprise that Burn Out is also a good figure. The black and red colors along with the new head look much sharper on the toy. I like it a lot more. As with Skids, Burn Out is pleasantly articulated and transforms into a Honda City Turbo fairly easily. Both modes are quite solid and the included guns add a bit of additional play to the figure. They can be attached onto the car mode or held in Burn Out's hands. There's also the option to plug them into her arms or combine them into larger guns. It's pretty neat.

Burn Out is meant to be the Diaclone version of Skids. In G1, Skids was made from the Honda City Turbo Diaclone toy. That figure was available in multiple colors like other Diaclone Car Robots toys. This Legacy update is a fairly faithful to the original design with updated engineering. Unlike the original toy mold, this update cannot hold a driver. However you could probably plug the BotCon 2015 Diaclone pilots into the holes intended for the guns like with those figures. 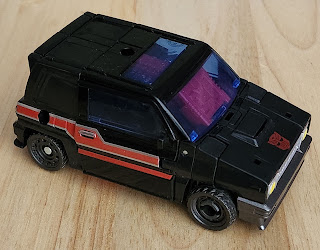 Diaclones do not have an individual personality. They're driven by pilots. However, Diaclones released as Transformers DO have a personality. They're either released as new Transformers characters based on the Diaclone colors (like Road Rage). Or, like with Burn Out , they have an Artificial Intelligence that mirrors the pilots personality. Burn Out is driven by Dia, thus she's much alike her. Diaclone in Transformers fiction are much like their original counterparts. They're a military style force that pilots robots to fight threats, just now alongside the Transformers. When they expand the world with other series like this... I love it. Burn Out is an somewhat easy to get at a fairly low price new Diaclone figure that fictionally is in the same universe as the series her original line birthed. That's ridiculously nerdy... but in a very cool way.