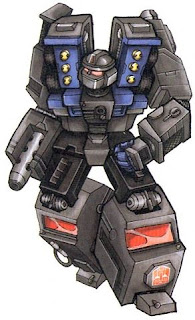 Anti-Blaze, a junior member of the Mini-Con Council of Sages, was among those who argued most passionately against asking Optimus Prime and his Autobots for help. He felt that involvement with the larger Transformers had brought only grief to the Mini-Con race, though he now regrets his position. He has been forced to make the unpleasant transition from a relatively unknown political figure to a military leader at the front lines as he fights against Thrust and the other evil Mini-Con rebels.