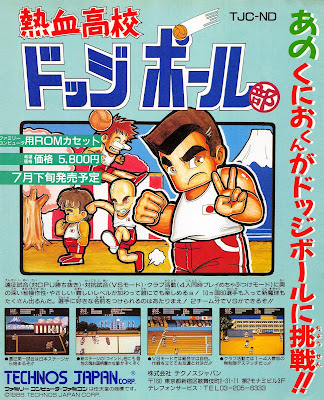 I'm not into sports. Wrestling is the closest I come and that's not really the same thing. Athleticism, sure, but not really a sport. I'm obviously not playing many sports based video games. There's a few I do enjoy, and it's not really the actual game that I mind... it's just I'm largely not interested. One game that's technically a sports game that I do like, however, is Super Doge Ball/Nekketsu Kōkō Dodgeball Bu. Just in-case the name wasn't clear, it's a dodge ball video game and part of the Kunio- Kun game series.

You know, I appreciate the Kunio-Kun games so much that one day I should take a deep dive into the series proper and not just the old Nintendo Games. I didn't even know it was an ongoing series as a kid, I just noticed all the characters in the seemingly unrelated games looked alike. I got some insight (thanks to the internet) and I for the most part like all the games in the series I've played (Renegade, not so much). So maybe a deeper dive should go in the 'to do' list.

Doge Ball is a game that has seemingly countless variations of how it's played. In this game the court is separated in half for each team of 6 players. The in court players have life bars, while out of court players on the opposite team's side serve as assist players. Hitting the in court characters diminishes their life bars and a player is 'out' when their individual lives are depleted. When all three are out, that team looses the game. The out of court players don't count as far as that goes,are there mainlyfor assistance. Helping pass around the ball when it's on the other side of the court. Doing this allows to to get a little insight on the locations of the other team players and even get a cheap hit in or two. Either team can steal the ball, so it takes a little skill to avoid them getting the upper hand.

The ball is thrown at opposing sides by the in court players. You can jump, catch the ball, and run around while throwing or taking cover. Certain combinations of running and jumping while throwing the ball can result in a 'special' move throw that's turbo charged and hits harder. There's a variety of these that each provide a boost to your teams abilities. They still can be caught by the other team like a normal throw, adding balance to the game play. There's a few different game modes, mostly to allow for multi player, but the 'World' mode is the single player main game with a proper ending after beating the game. There's also 3 difficulty settings for this mode for repeated play.

Your team travels across the world playing other countries teams. Depending on the version (NES or Famicom) teams are a little switched up, however USSR is generally the final team before facing the 'Team Shadow' to beat the game and win the tournament. Team Shadow is a clone of Team USA in 'shadow' colors and are generally an even match for your team. Each country has a different background and music. Iceland and Kenya's courts add a little extra challenge. Iceland is icy and slippery, while Kenya's muddy dirt floor is harder to run on. The game's ending is a simple victory screen with a snapshot of your team celebrating before the end credits.

The game is a simple enough concept with enough variety to keep it interesting. Once you figure out the basic mechanics, you'll be hooked. It is REALLY fun and you'll find yourself going back over and over again. There's been a few ports and semi-follow ups. Even an arcade version, but I'm mostly familiar with the NES game. It's currently on the Nintendo Switch Online service NES channel. I really can't describe just how much fun the game is, so I'd suggest you give it a go if not already familiar with it. Kunio-Kun games are a staple of the NES experience, even if we weren't fully aware of who Kunio-Kun was at the time. I think the themes of school rivalries, gang violence, and dealing with bullies are something anyone can relate with regardless of the region. 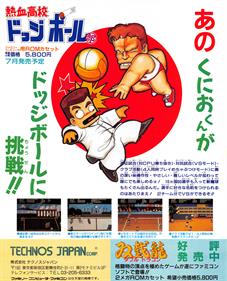