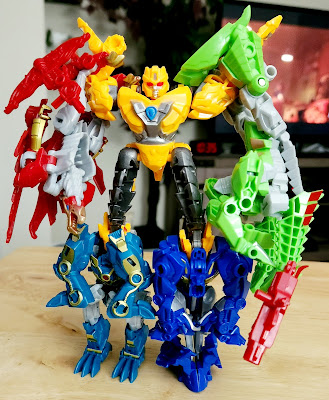 Dino Robot is a set I've been tracking down for a few years now. Thanks to Shawn's tip, I found a set at my local Rose's. A store I often forget exists. As you can tell by looking at the pictures Dino Robot is a knock off of Go! Goradora/Beast Hunters Abominus/TF5 Infernocus. Specifically it's a K.O of Goradora as those are the closest in colors it comes to. The individual combiner members are sized up a little being closer to Core Class scale than the Legion/Legend scale the originals were. I'm a fan of both size classes (as you probably know by now), but having more Core Class bad guys is definitely a good thing. I have both versions of Abominus, Infernocus, and multiple (but not all) of the individual uses of these molds... but no Goradora. So Dino Robot is a good substitution for the Goradora I don't have. However, I'll be refereeing to the set at Dino Robot the rest of this post because I kinda love that name. It's a discount store bootleg robot toy... it damn well better have a name like Dino Robot.

Speaking about names... these guys man. Each member's name is their alt mode, or what the shady company that made the set thought their alt mode was. Jurara is named Tyrannosaurus Rex, which is a stretch. However the original mold has been used for Grimlock a few times, so I guess it works. Barara is named Pterosaurs. Which I guess works, even though he's more of a take on Firebird from the Hanna-Barbera Godzilla cartoon. He's supposed to be a dragon of sorts, but now you can't unsee it either. Burara is Monster... which fits. Lastly both Dorara and Garara are named Double Dragon. Which is awesome. However as they both are named Double Dragon... I guess one is the NES port. These are not complete 1 for 1 matches to the originals as the colors are not exact. Dino Robot is closer to this team than the others, however.

This is a pretty good set for some knock off toys. For Twelve dollars and ninety nine cents I got what the box advertised as an 8 piece set. The Five In One Dino Robot and three weapons. Yeah... they counted the weapons as pieces to advertise on the box. The figures are larger than their original use as I said above, but don't look too bad. Considering the age of the original toys and multiple uses they look pretty sharp. Of course I don't know when this mold set was made off the original toys or if it's just a  stolen CAD file as the box art is CGI models. There is some loose joints here and there, but for the most part the figures are decently sturdy enough. Pterosaurs is probably the worst of the batch when it comes to that. Those three weapons... the group does have a problem holding them correctly and they don't connect together well either. So I just kinda had to make them work where they could.

I was pleased with how stable they were combined together. When it comes to these sets the combination is either sorta ok or a complete shit show. These guys were pretty high in the sorta ok end of things. Everything actually worked pretty well, but the legs could have been a lot better. Admittedly the original toy's legs were never so great either. This was during an era of Transformers where there was obvious sandbagging when the creatives didn't want to do something the higher ups commanded. You'd think HBK was loosing the match with those legs. Honestly, the arms are a little half assed too design wise, but considering it's supposed to be a monstrous robot... it works. Just the legs could have benefited from a little more effort. To be fair they were small toys sold at a pretty low price.

I am pretty happy with Dino Robot as is, not only does he make a good stand in for Goradora but at that bigger size makes for a great villain for the upcoming Core Class Volcanicus to fight. It's been a while since I've bought a discount store robot and that's an itch I've been needing to scratch that Dino Robot fulfilled. Despite some hit or miss points in the toy, it is a satisfying experience. For twelve dollars and ninety nine cents you're not getting a lot these days, hardly even lunch at a fast food place. So a somewhat decent robot toy set that didn't crumble in my hands (it has happened before) that definitely has a purpose... yeah. Dino Robot's ok. 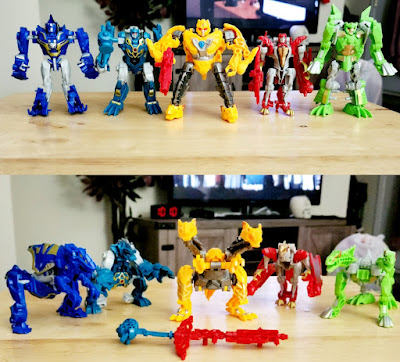