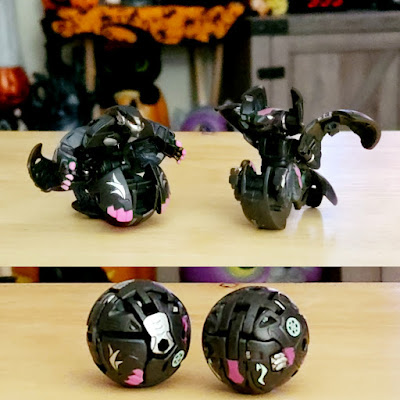 Nothing says the spooky season like a bat and a black cat. It's funny that fate provided that Halloween appropriate Bakugan toys would be at my local Walmart. Guess even the universe is in the spirit. Wrath, the feline of the pair is normally a white colored character. Bakugan doesn't shy away from multiple color variants of their toys, so the magic of Halloween was working overtime for this coincidence. Griswing, (the bat) the same.

All things considered, I'm taking this find as the work of The Great Pumpkin.

These two are from the Evolutions sub-line and are of the basic all plastic variety. While I do tend to favor the True Metal versions, that doesn't take anything away from these guys. As you can see in the picture above, they're seemingly simple. The chunkiness is something I like and part of the overall charm of these guys. Readers know I'm a fan of egg bot style transforming toys and that older school robot toy chonk as well. I wish they had chromed weapons to really top it all off.

I said above that they're seemingly simple. Seemingly being the key term as Bakugan mostly self transform. The 'marbles' are rolled out onto the cards and tiled tokens as the game is played. Magnets in those tiles trigger the auto transformation springing Bakugan to life. The more complex toys require a little extra fiddling to unfold out other parts, but that's generally the gist of it. You, however, have to fold it back into place yourself. That's where the seemingly simple comes into play. Some pop right into place, while others have to be done in exact order. Both of these guys are in the exact order club. It's not super difficult, but I can see it being frustrating on a bad day. Considering the spooky flavor these two bring to the table, it's kinda fitting.