Shin Halloween: Thrice Upon a time 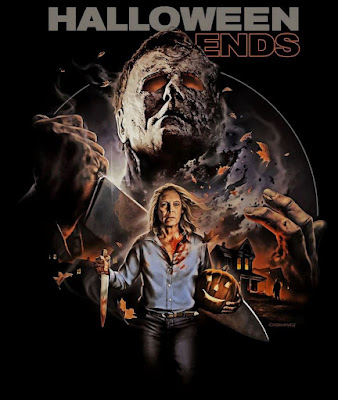 What they're billing as the final Halloween movie (and this time they mean it) was released this weekend. I enjoyed watching it in the comfort of my living room on Peacock. Halloween Ends is effectively a narrative ending of the series. Or at least this most recent rebuild series that started in 2018. That movie picked up 40 years after the original and ignored the other sequels. While I really enjoyed that 2018 movie for the most part (not a fan of the ending), it's follow up, Halloween Kills, was a pretty big let down.

To be fair, there was parts of Halloween Kills that I liked. It was just the muddled execution that overall resulted in a not so great movie. Halloween Ends picks up 4 years later after Halloween 2018 (Kills takes place in the same night) with Michael Myers missing and Haddonfield worse off for it. I'm not going into spoiler territory as it literally just came out. I liked this movie a lot more than Halloween Kills. I like the story, but it could have been told better.

If this really is the last Halloween, I'm ok with it. Despite it's flaws, the movie really does feel like a proper end. Usually these 'final chapters' installments are not much more than another entry in the series without much finality to them. I'm sure in time the series will receive another reboot. I could go for a sequel to Season of the Witch if so. For now though, I'm ok with saying goodbye this time. Saying goodbye never feels perfect and there's always those thoughts of how it could have been better. If it is goodbye, then at least I have closure.