While I've been looking forward to the Star Wars Micro Galaxy Squadron toys (only seen Boba Fett in stores, waiting for the smaller sets first), I was reminded of another cool Star Wars line from the past. Star Wars Transformers debuted in late 2005 and were pretty neat. I still recall when the news first hit of the crossover line, most fans anticipated things like Jetfire turning into an X-Wing. However the line ultimately ended up being something different. The toys were classic Star Wars vehicles that turned into robots based on a classic character piloted by a little figure of said character. It wasn't what I expected initially, but I was sold on the idea instantly. Similar to Animorphs before it, these were Transformers branded toys not connected to the greater TF fiction. Of course this ruffled some feathers... but what doesn't?

The toys themselves were pretty neat. Not only did they feature the inch man style pilots that I so love (I wonder if those will fit in the Micro Galaxy Squadron?), but they also featured some genuinely cool designs. One particular thing I've always liked was how lightsabers were used. Of course the robot would use them as a weapon, but in vehicle mode they'd be firing missiles. Think about how a laser looks in Star Wars when it's being show (pew pew) and then think about a lightsaber. That's pretty dang clever!

My favorite of the toys was the Darth Vader Death Star. The figure was large and the Death Star could contain those tiny pilot figures. A cool extra touch was the inclusion of small Tie Fighters that had simple robot modes themselves. They were pretty basic, but made for some cool drones to assist the giant Vader in battle. Probably the coolest extra was a cloth cape. Darth Vader has a cape, we all know this. However a giant robot that turns into a moon sized planet destroying space station with a cape? BADASS. This was a seriously cool figure that was all toy. Star Wars Transformers was a really great line that ran for years. I'd liked a cartoon, a game, or some kind of other fiction. However Star Wars isn't exactly hurting for fiction or games, so I can understand why there was none. Still wish there was a Darth Vader that transformed into a scorpion. 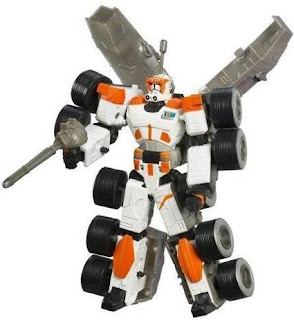