I obviously love Beast Wars as do a lot of folks. It's this great period in Transformers history that's been pretty hard to recreate. Though I do appreciate the return of sorts it's had lately. A particularly fun time during the beast era often goes by without a lot of talk. I don't know if that's slowly getting lost to time... or maybe just meant more to me than others. That would be the Fox Kid's Beast Wars. Beast Wars was originally a syndicated show. Beast Machines, it's follow up, was on Fox Kids. For a while during this time, Fox Kids also ran older Beast Wars episodes. For me this was pretty great as I wasn't able to watch every episode during the shows original run. However now these reruns fit my schedule better and I managed to catch the ones I missed. Honestly, it was aired at a particularly sweet spot for me that I never missed an episode and watched the series in it's entirety over and over until the eventual end of the run. That was great.

Fox Kids Beast Wars wasn't just reruns to supplement Beast Machines either. Hasbro/Kenner re-released some of the toys in great new colors as well. I liked Beast Machines, don't get me wrong, but I vastly preferred Beast Wars. So I was really happy to see the figures on shelves a little longer. This was still during the time where older toys had a longer shelf life. It wasn't uncommon to still find something like an Inferno or B'boom in 2000. In fact, as I was starting to have a disposable income, it wasn't until then that I was able to get some of these great toys.

Those Fox Kids Beast Wars toys themselves were something special. Like I said, they were released in fun new colors. If you didn't already have a character, there was another chance. If you did already have a character, maybe you'd like it in fun new colors. Initially these recolors were listed as powered up versions of the characters. Energon Surge Rhinox, Live Wire Dinobot for example. However they were released as their normal names. The Fox Kids toys ran for about the same length as the show aired on Fox Kids with the later figures sharing cases with the Mutants. It's not often that reruns get their own figures or can be partially credited for expanding the toy lines shelf life. But, these did. I'm not sure anyone at that Walmart I'd frequent remembers the kid in a Static-X t-shirt and a grubby hoodie late at night buying these. But 22 years later, I still look back at it fondly. It was pretty great. 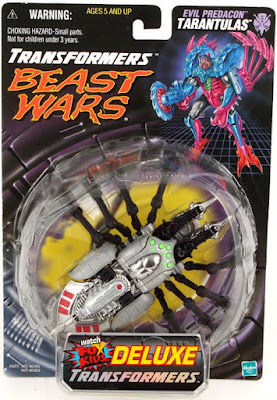