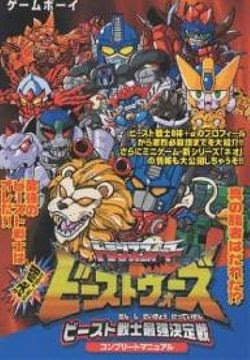 Look, I don't know if my fondness for Beast Wars has been noticed or not. But uh... I really like Beast Wars. I also like video games. There was a few Beast Wars video games that came out during the beast era. I'm apparently in the mood for Gameboy games this week so I've got a great BW game to talk about. Duel Fight! Transformers Beast Wars: Beast Warriors' Strongest Decisive Battle was released for the Gameboy Color in 1999. Developed by Gaibrain and published by Takara only in Japan.

As the name would imply, the game takes place during the Beast Wars, but features casts of Beast Wars, Beast Wars 2, and Beast Wars Neo. Beast Machines wasn't released in Japan until a few years later, I'm not sure why the Transmetal/Metals versions of characters were excluded. I presume it's so everybody matches thematically, but I don't know. Maybe. The game is a pretty decent 2D fighter, probably not up to snuff for hardcore fighting game players, but solid enough to have a good time. There's a few game modes and a pretty large cast of characters. I've always been impressed by that, you'd think a cartoon tie in game for kids would be basic shovel ware. But no, this is a pretty solid effort. Moon and Artemis are secret characters, and I'm always up for Moon.