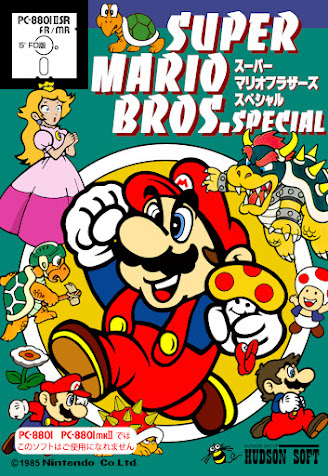 I quite like Mario, always have. Even with a lifetime of him in video games, cartoons, and everywhere else: there's always something else. It's pretty cool that such a long running and well established character can manage to be obscure sometimes. With as many times that the original Super Mario Bros. has been reissued, you'd think you've seen it all. That's not exactly true as when they reissue the game, it's the orignal game. There's actually a few special editions. Then there's a version that's outright just named Super Mario Bros. Special.

Super Mario Bros. Special is a version of the classic Super Mario Bros. developed (officially) by Hudson Soft for some NEC, Sharp, and Samsung home computers for the Japanese and South Korean markets. It's weird to imagine a time when Nintendo would allow something like this to happen, but many folks in my age range likely remember Donkey Kong and Mario Bros. on Atari and Coleco Systems. Not to mention random titles by licensed developers in the 90's or the recent mobile games. Sometimes they're willing to make a deal I suppose.

Basically, the game is a port of the classic Super Mario Bros. that was released for certain home computers. The idea of it sounds pretty great, there's even a few new items and villains from other Mario games that make an appearance. However due to the limitations of those older computers as compared to the Famicom, things were a little toned down. The graphics were not as colorful and a little lessened. There was some audio differences too. It sounds like it should, but a little off.

Luigi was absent, but most noticeably the screen didn't scroll for the most part. When Mario would get to the edge of the screen, instead of that smooth scrolling you're used to, the screen goes black and the updated screen is presented. Not exactly ideal for some of those big leaps of faith. The controls were also a little wonky as Mario just doesn't move normally. I hear the Sharp X1 version handles it a little better though. It's weird to say a PC version of a console game was inferior (I can hear PC gamers scream out in disbelief), but it really was. Regardless of it's faults, Super Mario Bros. Special is a pretty unique side note in Mario's long history. I'm pretty sure it was cool at the time to have the availability of such a popular game for those who may not have had access to it normally.