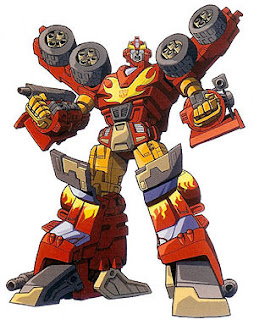 The Unicron Trilogy era was a pretty fun time. Transformers as a brand was huge and there was a ton of available product for fans at pretty fair prices. Didn't like Armada/Energon/Cybertron? There were reissues, Universe, Alternators, Robot Masters, etc to pick from. Armada has a lot of derision in the fan base. Well, it had a lot of derision from the loud mouths who talk over everyone else. It was fairly popular and sold gangbusters. To be fair, the cartoon had it's issues and the toys were quite different from what came before. Like I said, it sold very well. Money talks and bullshit walks.

By summer 2003, Energon was gearing up to take over and fan excitement was high. After initially being developed as Super Cross, the line as a whole was very similar to Multiforce with the combination gimmick for the Autobots. As early looks and leaks made their way out, fans eagerly gobbled up every bit of it. Rodimus was a big deal. At the time, the only Hot Rod or Rodiums Prime stuff was from the G1 version. The only new products of him would be reissues or random merchandise as well. Several (including myself) wanted a Rodimus Primal in Beast Wars or thought Sideburn should have been Hot Rod. So when Rodimus finally made a return, it was a joyous occasion. Energon was a pretty good time with some great toys. Sure the cartoon had it's issues, but once again it sold well. For a pretty good reason.