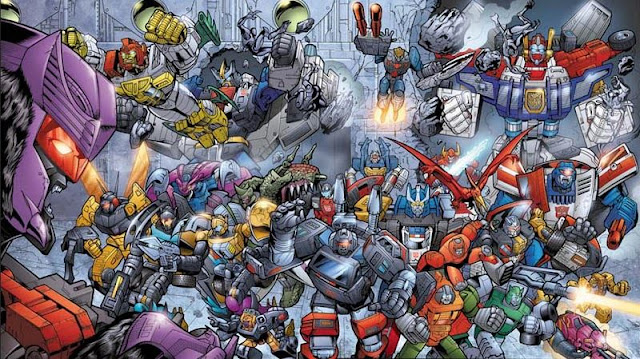 It was the early 2000's and Transformers had been slowly growing from this kids thing with a small adult fan following into a pop culture phenominon. This was years before the live action movies propelled things into the strotosphere and you had Bumblebee on bottles of Mtn Dew. However thanks to places like Hot topic selling shirts with Autobot symbols on them and the then new Dreamwave Transformers comic flying off the shelves, things were growing.

Armada was a much bigger hit than anyone expected, leading to stores demanding more toys faster than they could be produced. Not to mention, the adult fan community was growing now with the internet getting into more homes and connecting people in ways it wasn't before. Repainted toy molds are a common thing in every toy line. However, for the most part, only a handful of Transformers would get a repaint up to this moment. Suddenly Hasbro needed to get more product out.

Toys take longer to develop than you'd think. There's a lot of hands in the pot all working on the same project. Transformers is a toy line with a longer developmental timeline due to the engineering involved. The fastest way to get stores new stuff out ASAP is to reuse existing resources and that's what they did. Practically every toy in Armada was repainted into a new version of the toy. At BotCon 2002, the exclusives bore the new label 'Expanded Universe" similar to Star Wars. Before then, they'd have the current lines logo. The ongoing story line would take place off screen of the current fiction usually with non-show toys serving as characters.

Expanded Universe toys were still starring in the ongoing convention story line. Honestly it seemed like a good way to brand the convention toys and let those who used them fictionally to place them wherever. Halfway through Armada, something called Transformers Universe happened. It all but replaced the former BotCon, now called OTFCC's storytelling. Now all of their exclusives bore that title instead of Expanded Universe.

Transformers Universe ultimately was a brand new toy line made completely from repainted existing toy molds that sold right next to Armada (later Energon and Cybertron). At the time, Transformers didn't have the standard amount of shelf space most of us are used to. There was an entire 6-8ft section in most stores full of product. It was cool, and maybe a little overwhelming. You might hear the occasional older fandom member say "it used to be about 20 toys a year". It really was, and now there was a ton out seemingly nowhere. Add in things like G1 reissues, odd merchandise that kept popping up, or the cool things going on in Japan like when Robot Masters came out. There was just a ton of stuff!

Lots of stores had exclusive Transformers, mostly under the banner of Transformers Universe. There was a mix of Beast Wars/Machines, Robots in Disguise, Armada, and even older G2 and Machine Wars molds! Want a toy in exciting new colors, here ya go! Miss out on a toy before, well, here's another chance! It was great, and according to the Hasbro Transformers team, they were working on getting Brave molds into the line. Neat! Fictionally, all the Transformers throughout the greater Transformers Multiverse were all brought together inside Unicron. They'd fight to the death while Unicron would feed off the death and anger. OTFCC was directly selling comics to further the story... and that's where this story takes a nose dive.

There's some of you who read the name OTFCC and said 'what?'. Some of us collectively exhale. I've talked about it before, but let's explain it as simple as we can. Prior to Fun Publications BotCon was ran by 3H. 3H was the convention founding Hartman brothers and their friend Glen Hallit. They split up shortly after BotCon 2002. The brothers took the BotCon name with them and Glen continued to run the convention and now fan club named simply 'Official Transformers Collectors Convention/Club' or OTFCC for short. IUp to this point Hasbro supported BotCon, but by 2002, they had secured a license.

OTFCC didn't go as planned. Delays and other issues cause the show to fail and shortly after the 2004 convention the license was taken away from Glen. A little later Fun Publications was the new holder with the Hartmans back on board. Those 3H comics had sporadic releases and the story line ultimately went unfinished due to 3H closing down shop. The toys, however, went strong for a few years before dwindling down in 2005 before living out a few years as a discount store line. As a discount store line, the toys were generally lower cost figures repacked from prior lines such as Energon or Cybertron in a generic Transformers Universe packaging. The name itself got another life years later. What we now call Generations, went through a few names changes initially and was called Universe for a while.

And just like that, it was forgotten. The Multiverse comes up time and time again and gets used differently in various fictional outlets. The word multiverse gets thrown around a lot lately, that's what inspired me to write this. Some people have outright forgotten about the original Universe or maybe never learned about it depending on their fan experience. Often you'll hear G2 colors either mocked or loved, but the often weird purple's and wine colors used in Universe go by unmentioned. That's a shame, it was fun. I thought so at least, I mean, I just wrote a lot of words talking about it.