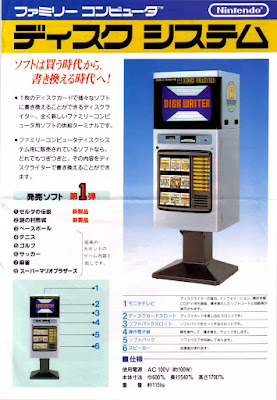 Sometimes it's pretty to look at something you never had the option of using and think that you'd love to have had that. I'm sure we're all that way about a few things. One such thing for me is the Famicom Disk System. Growing up in the States with the NES, it was never available to me. I'd occasionally read about it in various game magazines, but being younger and accustomed to the NES, it wasn't something I thought about until getting a little older. Then it became something that seemed so very cool to me. Like the Satellateview and SEGA Channel, it was another neat way to expand your console.

A brief explanation for those not in the know. The Famicom Disk System was a disk drive that worked with the Famicom (NES). The games would come on the cheaper disks and re-writable disks were available. Those re-writable disks could be used at kiosks to purchase games at a lower cost that on a cartridge. Buying a new game on a used disk would re-write a new game over the existing game. In Japan, games rentals wasn't a thing and this made a fine substitute. Considering the legal battles going on over game rentals here at the time, I'd like to think it would have replaced that market.

It was pretty popular and the kiosks could be found up to 2003 still operating. This is something I'd have loved. I can see myself buying boxes of disks and buying up games from machines in early adulthood. Back when I'd travel to different stores toy hunting. Back in those days, I'd often hit up different grocery stores to collect Homies and other coin machine toys. Hey, this one kiosk a few miles away has a special edition game? Off I'd go! I can see it clear as I'd travel an hour just to follow up on a lead. Admittedly, I'm enthralled by Gatchapon machines in general and would probably have a page here with my open trades if I were local to machines.

Here's where I admit that I'm day dreaming. Whenever you mention some older tech looks, someone will chime in with whatever negative things it had. It's probably true, but obviously wasn't a big deal as some of those kiosks were around so long. Cartridges did eventually have tech that wouldn't work on the disks and apparently piracy was an issue. Whatever, right? Piracy is still an issue and technology eventually moves on. It's easy to look back from the future and judge the faults later. I admit that I'm looking through rose tinted glasses on the subject. In my minds eye, it looked amazing.