Had my Atari those days 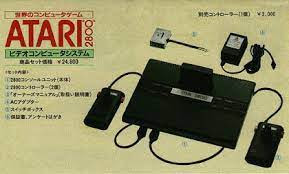 The other day something got me thinking about playing Atari back in the day. I was a 2600 kid, had a few different units. One would seemingly burn out in time to find a replacement at a thrift store. Said replacement would last the same amount of time. I think my last 2600 was actually a Sears Video Arcade. The Sears Video Arcade was the Atari 2600 sold under Sears branding for whatever reason that was. The person who'll inform me why will also correct me that the 2600 was originally the Atari VCS. For that person, thank you for your input. Because of my age it will always be the 2600 as by the time I got mine, it had been renamed.

I loved my Atari and have some fond memories of playing it on my little 13" black and white TV while listening to the radio. Of course the NES surpassed it in every way, but I still played my 2600 during the time as well. After all, a NES game could be pretty exspensive and an 2600 game could be bought for pretty cheap. I had to wait for a holiday to get Megaman 2, but got Vanguard for a few bucks on clearance. Fortunately the same place with those cheap Atari games turned out to be a cheap NES game outlet eventually. Good old Kay-Bee.

One thing that I never liked about my trusty 2600 was all those switches. They served a purpose, but I never liked them. Speaking of things I didn't like, I hated switching between the paddle controllers and joysticks. With my NES, all I needed to swap around was the light gun occasionally, and that was a big occasionally. It wasn't until adulthood that I learned of the Atari 2800. Which would have been the ideal Atari (other than an ST) for me at the time.

The 2800 started it's life as a Japanese version of the 2600. It featured a more slick looking console to compete with the Famicom and other newer consoles at the time. This was just before Atari updated the 2600 with a sleeker looking box (at a much lower price) to try and compete with the NES. It looked sharp, replaced those switches with much more modern looking buttons. Most importantly, the controller was a hybrid paddle and joystick unit. A good update that corrected some issues.

Unfortunately for Atari, this wasn't much of a success in Japan. It wasn't even their first attempt at marketing the 2600 over there. The 2800 was about $100 (in US dollars) more than a Famicom and was almost a 10 year old system at this point with no real way to compete with the then hot new thing. So the 2800 bowed out of the race in Japan quietly before finding a new life here in America as the Sears Video Arcade 2. Don't ask me how we got back to Sears, history can be weird sometimes. 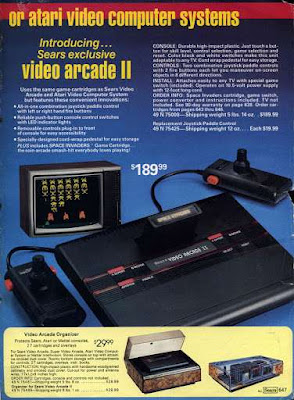