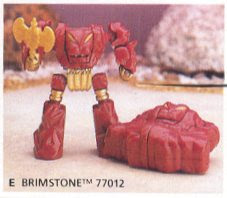 Brimstone/BloodyRock is a pretty awesome toy. As far as Rock Lords go, he's pretty freaking hardcore. This giant red demonic stone robot with a monster head toting a burning axe. I almost wish that his Gobots name was BloodyRock, just to sell how monstrous he was... but Brimstone is a pretty good name too. Most of the evil Rock Lords have wonderfully monstery appearances as is, but they generally still just turn into rocks. Brimstone pretty much turns into some evil stone table probably used for evil rituals. Which of course is ideal for a children's toy.