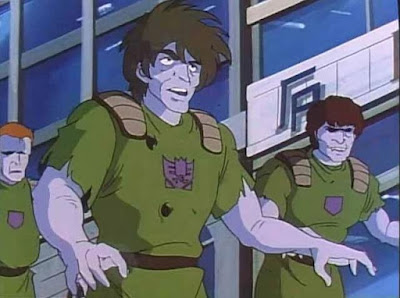 It was a dark and stormy night. A lone security guard patrols the medical university when he discovers the door to the morgue is open! Upon investigating he finds Decepticon Pretenders robbing the bodies of the dead! What could those dastardly fiends want with a bunch of corpses? They plan to make an army of un-dead soldiers, THE DESTROIDS ARE HERE! Part of the reason I love Masterforce so much is that it's complete departure from traditional Transformers story telling. While other series have strayed from the trail on occasion, Masterforce was the first to go it's own path. From the spooky depictions of the Decepticon Pretenders, to the Destroids, to an outright witch... Masterforce didn't mess around. Someone wanted to tell a scary story.