I've been looking for a new keshi line to really get behind. It's been a while since I've had one I could really follow easily enough to have fun with. That's where Million Warriors comes in. Recently my wife discovered them and introduced them to me. I was instantly hooked. They're currently exclusive to Walmart and fairly cheap, around 5$ for a blind pack of ten. There's also 20 packs available, which I haven't seen yet and don't know the price, though I'm sure are probably inexpensive. These little guys are great.

So far the line is separated into 3 tribes that the figures fall into thematically. Astrals, Ancients, and Heroes. While the names of the tribes give some semblance of a theme, they're all over the place with little weird freaks. The figures come in various forms of availability, from common to extremely rare. As of this writing I have 30 from 3 different 10 packs and have yet to get doubles and have a few harder to get ones (according to the guide). They're made from a few different plastic molds in a few different silhouettes with the characters printed on them. This obviously helps keep the costs down and allows for a wide arrange of figures to be made and I imagine quickly.

The art style is great, reminiscent of non-sport trading cards I'd often get as a kid. The characters range from weird looking warriors to crazy mutant freaks. I love them. Opening the two packs I got this weekend with the wife was so fun and exhilarating. I was literally bubbling over with excitement with each one. They come packed blind in little paper packets in a ticket style row. The 10 packs I had held them in a package shaped like crossed swords. The 20 packs are boxes that look like shields. There is a game that can be played with them using catapults that come with the 20 packs and numbers printed on each characters back.

You've might have noticed that I'm a fan. I am and a rather fast one at that. I really cannot express just how excited I was over these guys for a good day or so. I was practically exploding. I'm still practically exploding. I exploded. They are just the thing I've been wanting and done just right for this sort of thing. A proper keshi line needs to be fun and collectible. Having easy availability and low prices is a part of that. I can easily grab a pack while at Walmart, or add it to my weekly grocery order. At 5$ a pack of 10, they're so cheap that I don't even think about it.

They're very cool and the characters make me want more. At under 1" each, so even if I get a million Million Warriors, they can be stored pretty easily. I don't know if the 3 tribes are all there will be, but so far I'm happy as is. Million Warriors is the keshi line I needed and I'm sure other keshi fans needed as well. Spin Masters makes some good toys and this is another solid line from them. I hope it's a success and they make more than a million of them. 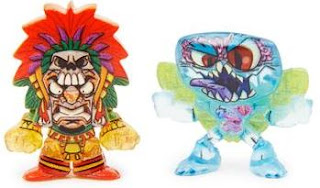