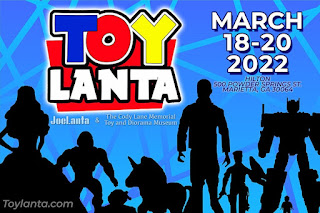 It's time again for ToyLanta! The annual toy show is something I look forward to all year and I can't wait to have some fun. As usual I'll be updating each day, so keep checking this post for all the adventures I'll be having. I'll be updating my Instagram and Twitter all weekend, probably more often than here. So be sure to follow me on those for cool pictures from the show.

I arrived at the show Friday evening just after 6pm. The day prior was a mix of sleeping off the work night and con prep. I slept between the grocery order, running to the ATM, getting stuff from store the grocery order was missing, and avoiding a tornado on the way back home. Spring is setting in here in the south, that means tornadoes.

At the con I met up with Shawn. Friday is a dealers room preview and lobby swap party. The dealers were setting up as we checked some out. The dealer space is massive and we only saw about a half of it as well as the Makers Lab. Makers Lab is an area full of tutorials for customizing toys and creating stuff to go with them. It's always neat. This lead to seeing Buddy before heading to the hotel restaurant for some dinner.

We ended up chatting and eating for a while and missed the lobby swap. However I think we had a better time. Shawn presented me with Shnaw, the Huddle House Sharkticon. In turn, I gave him StarViper a Zone Base exclusive Targetmaster. He'll pop up here soon. Toylanta is home to a lot of custom toys and those were the ones we made.

I headed home after eating my salad for the night around 10pm. Today's haul was Shnaw. A indie Sasquatch action figure gifted by Shawn. ReAction clear Merman and black Skeletor. Not to mention a Sasquatch mini figure made from recycled coffee mugs. I'm eyeing the room for Gobots tomorrow! But first, I'm going to finish this fig bar and get zome sleep.

I woke up at 7am and watched AEW Rampage off my DVR while making breakfast before heading to the great toy show. Getting there with a little timr before the Transformers panel, I took a little time to look around before going to the panel room. Then raking my place up front and talked with the folks in attendance for a hour. Afterwards Shawn and I went to the downstairs lobby area as Rebel Alliance solders ran about with ice cream makers screaming that the Empire is coming.

Shawn presented me with a large box full of Transformers. Dude up and gifted me a metric ton of robots. Thanks Shawn! We then took the box to my car before eating at tge golf course restaurant. The hotel has a golf course with a pretty good restaurant, probably should have mentioned that first. Great hamburgers. We then went around through both floors of dealer rooms. More time was spent in the Makers Lab as well. An awesome painting tutorial was being held and I spent some time talking CAD with the 3D printer guru.

More time was spent in the dealers rooms untill they shut down for the day. We found some chairs to take a break. I called the Mrs while Shawn fell asleep. We apparently was next to a door because a dealer was loading up his truck. Well, his girlfriend was while he had apparently drank a bottle of vodka and was busy making an ass of himself. We managed to escape to the hotel restaurant for some soda and tiny baked potatoes with carrots that the menu called 'fingerlings'. We had planned to participate in the parachute drop, but apparently nobody showed up except for us. So the parachute toy catapult was being disassembled as we walked up. It was about 7:30PM and time to head home for the night. Dang, I'm worn out.

Today's haul was a box containing a metric ton of Transformers in was cardboard box gifted by Shawn. Two Wendy's Gobots (don't remember the names currently, blue jeep and a blue jet). Brimstone the Rocklord, and a triceratops Tamagora. A great time was had and we've still got Sunday to go. I plan to revisit the table with ReAction stuff and grab the knight Arthur from Ghouls n' Ghosts and some more Gobots. There was a suprsigly lagre amount of Wheeled Warriors and Metal Man action figures, not to mention Battle Beasts. It's time to get some sleep before the last day.

I woke up again around 7am and fixed myself some breakfast while watching Golden Girls. Admittedly I wake up around this time normally of I'm not working as it's time to take my medication, but this weekend it's because of Toylanta! And also to take my medication... that's not as exciting though. It was Sunday, the last day of the show and last time to soak it all up. My Mom came with me today, she collects dolls and wanted to see if they had anything good.

We got to the show around 10:40am. First stop was showing Mom where the 'pink room' was. While there's assorted dolls around the dealers room, this was a room full of nothing but dolls. A dealer in noticed my Blockbuster Video t-shirt (auto correct suggested t-shit) and we talked about the glory days of that wonderful store. Shortly afterwards, Shawn found us and we hit the big dealers room. While looking around Mom found a dealer full of dolls whom also was retiring and looking to liquidate. A hundred bucks later, Shawn, Mom, and I walked a ton of doll stuff out to my car.

We came back and I made a point to grab a ReAction Knight Arthur from a dealer and looked for more Gobots. During the look I made a vaccum form sign for the wife in the Makers Lab and grabbed her some Baby Yoda stickers from a Star Wars booth. Most of those are already on her laptop. I found some more Gobots, two were more Wendy's Gobots.

I was thinking that was the last of the set, but after getting home discovered there was two more I didn't see at the show. That's a need to get so I can complete the set quest I'm now find myself on. After some more browsing we called it a day. The show was winding down and so was I.

I found Shawn and Mom sitting on some chairs talking to a GIJOE cosplayer and got some pictures of Mom with him. Goodbyes were said and I hope to see Shawn again at next years show (dude, you better). Mom and I stopped at a RaceTrac for slushies and donuts on the way home. We got back to my house for a nice homemade bbq dinner the Mrs had waiting.

My haul for Sunday was that ReAction Knight Arthur in magic armor, two more Wendy's Gobots (the names escape me, red car and helicopter bots), and an orange BuggyMan from Gobots. Not to mention the stuff for the Mrs, whom loved her sign (it's now hung in our bedroom). It was a good show this year and well packed with a lot of people. After all this time of covid-mania running wild, things honestly felt back to normal for the first time.