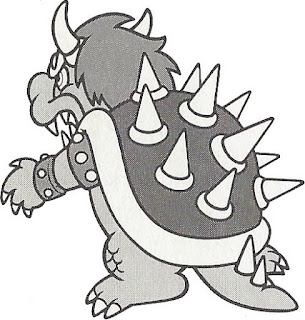 Video games are a weird thing sometimes. What may look like a throw away character might be a complete rabbit hole of it's own. Case in point: Bowser's Brother. Whats that? You didn't know Bowser has a brother? He does depending on the source. Super Mario Bros. 2 in Japan is a different game. It's essentially a harder version of the original game for 'advanced players'. Released here as 'The Lost Levels', Super Mario Bros. 2 is a VERY HARD GAME. One such challenge is 'fake' Bowsers popping up in locations for a quick boss fight. However hitting these 'fake' Bowsers results in minor villain appearing as he dies. That's because it's a fake, get it?

However in worlds 8-4 and 9-3 you'll meet a blue Bowser who doesn't revert into a minor Koopa minion. Why is this one different? According to some manuals and guides, that was Bowser's Brother. Does he have a name? So far no, Bowser's Brother is all we have to go by. Maybe he's Kerog. He does have a fake version of himself in level D-4 like his brother. Bowser's Brother also appears in All Night Nippon Super Mario Bro's (a special limited release) and in the upgraded Super Mario Bros. game in Super Mario Bros. All-Stars. Though he's green instead of blue there and depending on the source either a fake Bowser or Bowser's Brother. The blue coloration is often used in various Mario games as an alternative color set for Bowser, and it looks great. It's just not as interesting as a character who only exists depending on who you ask.