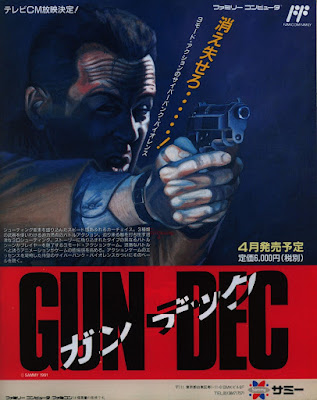 Vice: Project Doom (known in Japan as Gun-Dec) is an interesting game that's often looked over these days. You play Detective Hart who finds himself investigating the B.E.D.A Corporation, a company that develops electronic and military equipment. Turns out, B.E.D.A is actually ran by a secret alien race and the company also produces a product called 'Gel'. 'Gel' is essentially food for the aliens, but sold as illegal drugs underground. For humans it's super addictive, but has some terrible side effects. Along the way, Detective Hart works with associates and his girlfriend during the adventure.

The story is told through multiple cinema segments between levels. They're quite extensive and make me wish for a CD version with animation. Apparently a Genesis version was in the works named Deep Scanner. I want to believe the developers would have taken advantage of the more powerful system and perhaps those cinemas would have been more impressive. However, as a NES game, they're pretty good. The game is an action platformer, with driving and shooting stages. It's pretty fun, though can get frustrating. Fortunately there's unlimited continues.