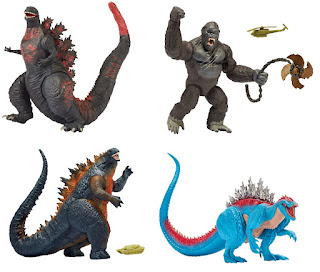 Official pictures of some upcoming Playmates Godzilla toys were recently released and I wanted to talk about them a little. Top left is a new Shin Godzilla that looks like a big improvement over the last version Playmates put out in the lines first wave. If anything, it's a nice way to see the improvement of the line from then to now. It really looks good. To his right is Kong as he appeared in Skull Island. Seemingly another use of the Kong figure from the Godzilla vs Kong series that flies off shelves. It's a great toy and comes with the chain weapon used against the giant skull crawler at the end of the movie and one of those classic helicopters.

Bottom left is Godzilla from 2019's King of the Monsters. Specifically in his 'burning' form. I never get tired of Burning Godzilla toys and this one has a great looking new sculpt and a tank. They never come with a bus though. I mean, he could pick it up and put it back down. It really does look great and I hope several variations in different decos come from it. Let's go old-school Playmates, give me translucent glow in the dark Godzilla with a bus. Last but not least to his right is Godzilla's third form from Singular Point known as Terrestris Godzilla. Representing a more juvenile version prior to maturity he's not fully erect and hunched over. Really, it's that sharp color scheme that draws me to this toy. It's a cool design, sure, but that blue!

I'm always ready for more Godzilla and have been a steady fan of the Playmates toys. The new releases coming down the pipe are just exciting. There's nothing like getting one and just being in awe of it for the first time. I'm really looking forward to seeing these at my local stores. Playmates has really been putting out a solid line of Toho Kaiju. Here's looking forward to figuring out how to stick them on a shelf with others. Those tails can really get in the way.