ToyLanta has come and gone until next year. With it a new set of memories and experiences. This year I did something different, this is StarViper. StarViper is the first of what I hope to be a ongoing series of custom Zone Base exclusive toys. There's only two. Shawn has one and I the other. If you follow me on various social media, I've mentioned buying Siege Caliburts for a project. Hand painting them into an original character was fun. Sure, it's pretty basic and others could have done better. I'm still proud of him.

I came up with the name with wanting it to sound like a ridiculous old video game character. I liked it so much that I've been using it as a display name in places. Personality wise, StarViper is a Decepticon Occultist that lives on Planet Zone. StarViper is a member of a secret organization formed by some of the Cyberdroids that first came to Planet Micro. His alt mode is a blaster that can be used by larger Transformers. While used this way, StarViper has some mind control of the larger robot. The blaster can also act as a short range flight mode. 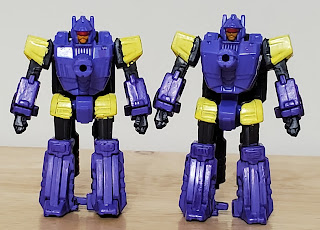