The Master of Oil 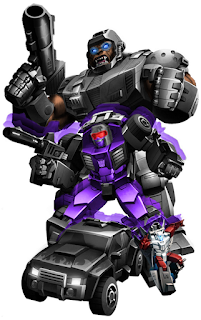 While looking at my Nemesis Primal figure, I found myself wondering why he wasn't Oilmaster? Let me rewind a little and bring my train of thought up to that opening question. Legacy Iguanus was previewed by Hasbro. Like other Pretender updates before it, Iguanus's robot mode is based on his Pretender shell with inner robot alt mode while ignoring the inner robot mode. It's a fun happy medium if they're not making a full Pretender style toy. The toy is a Core Class figure, a size class I do like a lot. Leading me to hope other Pretender updates in that scale happen.

I like Pretenders quite a bit. Always have, they're just fun. As time went on after their release and information became more readily available, the unmade Pretender shells became more common knowledge. They were certainly cool and as things work, the gorilla one became a character in E-Hobby comics. He was named after Oilmaster, a popular fan blogger. I always found that super cool. That's one of the things I've always enjoyed about E-Hobby toys. The inclusion of the greater Transformers universe.

More time went on and in 2015 Oilmaster was made as part of that year's BotCon Exclusive set. A brand new shell and the Legend Swerve mold was used to create the character. After all this time it finally existed! I do wish to eventually acquire the BotCon/TFCC Pretenders. They are some of the coolest things that came from the Fun Publications era.

So here it is some time later after that. Every so often I proudly look at my recent Walmart vintage Transformers toys. You know, the ones that come in 'vintage' packaging? I really like them. The recent Beast Wars ones are a particular strong source of emotion. I loved Beast Wars and that whole time era. I honestly miss it. That first gorilla Optimus Primal toy has always been a stand out Transformer toy for me. Sometimes I find myself imagining exclusive figures if I was in the position to create them. I can easily see myself pitching that toy mold as the toy that would become Oilmaster.

Then we get to that Nemesis Primal figure. He came in the 'Worlds Collide' Buzzworthy Bumblebee boxed set exclusive to Target. One of the reasons I like store exclusive Transformers is that they're essentially the modern day equivalent of BotCon exclusives. They're also pretty neat. The Worlds Collide set pretty much was an old BotCon exclusive box set in execution and certainly felt like one. Nemesis Primal was an alternate universe evil clone of Optimus Primal made from the Kingdom version of Optimus Primal. When the set was initially previewed, I took it as a throwback to Galvatron Lio Convoy/ Galva Convoy initially and thought it looked like the old Kabaya model kit. Which is pretty much is/does. However with Iguanus making the rounds and getting me all excited... I guess you can see what I was thinking in that opening question.