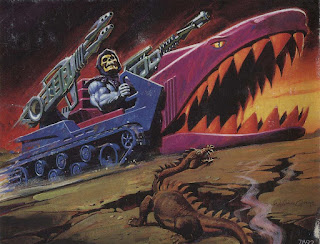 Somewhere within Skeletor's forces of Evil Warriors they got something right. Someone created the Land Shark. In a world terrorized by living Halloween decorations, somebody made a shark tank. A shark tank with a giant mouth that opened and closed. In the original cartoon the Land Shark was seemingly alive. A primitive robotic shark creature that lived to ride around and eat what it couldn't shoot. Or eat what it did shoot. Basically a death machine.

Outside of the cartoon, the Land Shark was just a vehicle that Skeletor used often in the mini comics. In Revelation, the Evil Warriors had a fleet of them, which was just great. Despite being totally ridiculous, it's also completely bad ass. If I described it to you, you'd probably laugh. However, if you saw it coming after you, you'd run in terror. Such is the weird world of Masters of the Universe. It's absurd, but in the most awesome way.

There's a new Origins toy I must get. I do have an original and the Hot Wheels mini. Something about a little die cast version of this horror show is impossible to ignore. I love the colors too. The purples and dark blue contrast nicely on the awesome look of it all. Something about a robotic shark tank being driven by a buff living skeleton is just so hard to express fully how awesome it is. I'm just in awe of it all.